There's a curious marketing phenomenon in this country centered around firefighters. I don't know if it's confined to the United States, but I know in other countries you'll see similar fundraisers with the police, military, or even postal workers. What I'm talking about is branding a series of products (in this case food) for profit and charity. Here, firefighters are generally free from scandal or public scorn. Attitudes toward the police, for instance, tend to fluctuate depending on current events and personal experience. If a policeman does his job and gives you a speeding ticket, you're angry for the rest of the day. If a fireman does his job and saves your house, you're likely to break down in tears of joy.

I'm not arguing one against the other, but for some reason I always notice firefighter-branded products and companies. Hot Sauces are popular, and ripe fodder for all sorts of puns and fire references. There's a chain of sandwich shops called Firehouse Subs that, curiously, steams its subs rather than flame toasting them (I do love their brisket sandwich, though). Usually these are side projects for professional or volunteer firemen, or companies run by retired firemen. And there's usually some sort of charity connected to the operation as well. 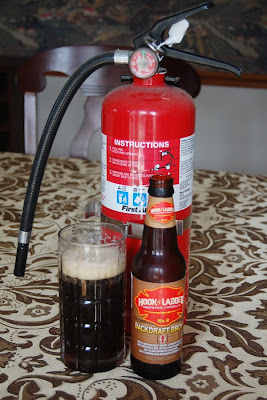 1) Founded by a volunteer fireman

3) Donations to local burn wards ("Penny in Every Pint", "Quarter in Every Case", and the money goes to the city or region where you bought the beer)

So how does it taste? It's a pretty basic English-style brown ale. Not very bitter, but the flavor focuses more on the malts, where you'll get toffee and chocolate elements. I found myself wanting more hops, but it's a good introductory beer for folks who might be afraid of any beer that's darker than tap water Coors Light. It really reminds me of the sort of standard brown ale you can find at just about any brewpub. Refreshing, not strongly flavored in any particular direction, and a great match for simple bar & grille fare.

There's another curious side to this beer. It's produced under a system called contract brewing by The Lion Brewery in Wilkes-Barre, Pennsylvania, even though the company is based in Maryland, but started in California. It's a form of outsourcing: if you don't want to operate an entire brewery, you provide the recipe and specifications to an existing facility. They produce the beer, you handle all the marketing and everything else. There are mixed feelings about this in the beer community. In some cases, it's a great way for a small producer to create a consistent product without a huge financial risk. In other cases, it can be viewed as removing the specific regional qualities of a beer. Order a Guinness in Australia, and it's produced locally by Fosters. Order one in the US, and it's made in Ireland, but if you want a stronger beer and order a Guinness Extra Stout, it comes from Canada. (There are also much stronger versions of Guinness made locally in Africa and Asia, but that's another story.) 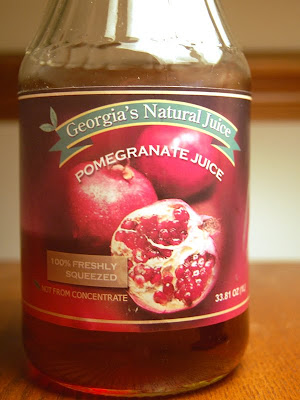 I don't really have strong feelings on the issue, but I tend to be generally curious about where things come from, and I wanted to point this out to scare and shock wine lovers. Imagine buying "Barolo" that had been mixed and formulated in a factory in Kansas. OK, wine and beer production are a lot different, and it's easier to emulate a certain style with beer, but who knows what the future will hold?

Coincidentally as I was finishing up this post, I happened to take a closer look at my bottle of "Georgia's Natural Juice Pomegranate Juice". I picked it up because it was cheaper than POM, and I hadn't tried it yet. Pure juice, no sugar or other stuff, sounds good. I found out that it wasn't from the Peachtree State, but rather the former Soviet Republic of საქართველო. The juice tastes fine, and there's nothing wrong with it, but I found it a curious bit of slightly deceptive marketing. Like if the ancient capital of the Egyptian empire in the other Memphis decided to start selling BBQ sauce and Elvis records.
Posted by Benito at 12:46 AM

To add to the fount of firefighter related fun, Cecil Deloach makes his Russian River Valley wines under the name Hook & Ladder Vineyards nowadays. After losing the Deloach name in a takeover of his eponymous winery, he decided to hearken back to his pre-winemaking days as a Fire Chief in San Francisco. The wines are unfailingly excellent values across the whole lineup, with the Gewurz being a particular standout.

When I first found the beer, I thought there might be a connection between it and the wine, which I've had in the past. There doesn't appear to be any direct relationship between the two companies, but it's yet another little oddity. You very rarely find wine and beer sharing the same name, except for perhaps Miller: "The Champagne of Beers". ;)

hmm seems interesting. Liked the photo with the extinguisher : )

Benito - Glad to see you focusing on craft/non-macro beer. It's been a while sine I've posted, but I still read the site quite often. I found my palate switching from wine to beer sometime in February and have been focusing there for the past few months (I'm not the best multi-tasker).

I'm new to beer, so I'm still trying to find what styles I like best. For now I'd say Tripels and German style Marzens are tops. I tend to like a good mix of hops and malts, but with a touch of spice. Brews like Sam Adams Boston Lager on steroids. Any suggestions?

Generally anything from Belgium is a good bet. If you've got it in your area, run through the Unibroue beers from Canada, like La Fin du Monde and Maudite. Anything from Dogfish Head is a great beer education in a bottle.