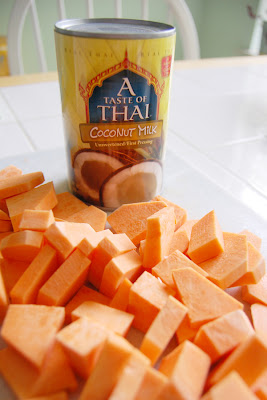 Round about 1990 I saw a cooking show on TV hosted by an odd chap named Graham Kerr. I knew nothing about him, but he was rather exuberant, despised cooking with alcohol, and promoted a lot of low fat recipes.

This confused me, because my father spoke of the exact same chef who went by the name Galloping Gourmet and used butter and cream in everything, juggled eggs, and swilled wine throughout the show. Each episode concluded with his signature "find a hot chick in the audience and invite her to dine on the completed meal with a nice glass of wine". (For info on his transformation and details on his biography, check the Wikipedia article.)

As this was a formative period in my cooking self-education, I remember a show in which Graham Kerr made a dish he called Kare Poaka, something from his New Zealand days. In fact, he made it as a special dish for a visit from the late Queen Mother. I remember it being odd but easy, as it was basically a stew of pork, sweet potato, coconut, and rice. I made it the weekend after the show and it went over well with the family. For years I thought it was an authentic Maori dish, but the name is just "dear pig" in the local language and further research doesn't reveal anything specifically like it. It should also be noted that, aside from the sweet potato, absolutely none of the ingredients are native to the islands, and even the local version of the sweet potato (kümara) made its way from South America around a thousand years ago. 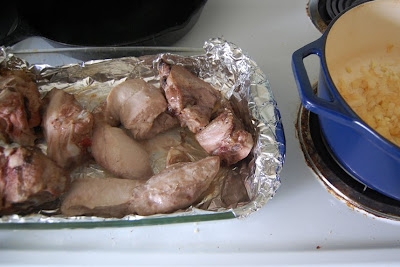 Similar dishes are made in the Caribbean, and while I don't have access to Kerr's recipe (his book is out of print and this whole thing is curiously absent from the internet), I can remember enough to make it happen. And even improve upon it. The original was something of a starchy mess, with big cubes of pork and a mash of sweet potato and rice. I've tried to treat it more like a Thai curry, and an array of hot sauces are ideal to perk up individual bowls. Here's my rough recipe: 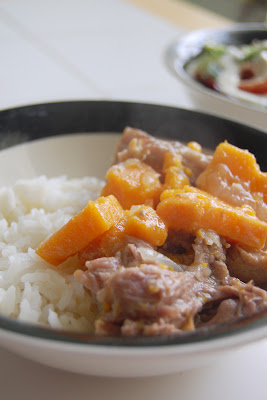 Brown the pork or chicken. This can be done in the Dutch oven on the stovetop, or using a dish inside the oven. Either way you don't want to fully cook them, just get them brown on the outside and render out some of the fat. Pour a couple of tablespoons of the fat in the Dutch oven and sauté the onion and garlic until clear. Add in the meat and stir, then add in the liquids. (The coconut milk may be semisolid and look like yogurt--don't worry, just stir it in.) Mix well, add in the sweet potato. If you'd like, feel free to add some peppers for color, flavor, or heat. Seasonings like Chinese Five Spice Powder would be appropriate, or go nuts with ginger, cumin, lemongrass, etc.

Let it simmer with the lid askew for a couple of hours. You want the liquid to reduce somewhat. Stir gently once in a while (you don't want to smash up the potatoes), and skim off most of the fat that collects at the top. When the meat is easily shredded with a fork and tastes good, kill the heat and let it rest. Right before serving, make the rice. I like something aromatic like basmati or jasmine, but anything will work. Serve some of the shredded pork and sweet potatoes over the rice, and ladle a bit of the sauce over it. Some chopped fresh basil or cilantro would be great on top.

This goes great with a nice cold beer, but an inexpensive sparkling wine would work as well, maybe a crisp Sauvignon Blanc.
Posted by Benito at 12:12 AM

Great post, Graham Kerr was a good chef and TV host. Julia Child, Justin Wilson and Graham Kerr were the pioneers for cooking shows. Thanks for reference to the Maori, just watched the New Zealand National Rugby Team, All Blacks, perform the Haka "Ka Mate" on You Tube.

There's a lot of folks that wish Food Network or some channel would air a bunch of those old shows, but the rights are often complicated and too much trouble.

I remember the newer Graham Kerr shows came on Discovery, either before or after Great Chefs. Now that was an impressive series. Looks a little dated now, but you can learn a lot about saucing, plating, and how to prepare things in the proper order to get everything out at the same time.

(If anyone is curious, there are tons of Great Chefs episodes on YouTube.)