I had a Malbec on hand, and a craving for rack of lamb. A match made in heaven. 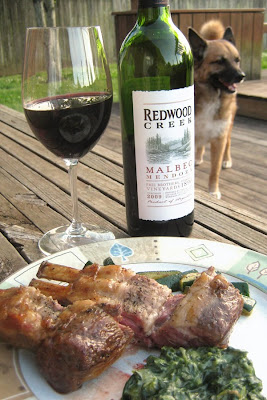 Here's what I did to the rack of lamb. I just trimmed the fat cap as usual, but brushed it in a mixture of golden syrup, Dijon mustard, and soy sauce. What were the precise ratios? I have no idea. Mix them 1:1:1 and taste, and if you want it sweeter, add more syrup (or honey/molasses/corn syrup/whatever you're using). If you want it hotter, add more mustard, or dash in some hot sauce. If you can't make up your mind, but it doesn't taste quite right, add canned tomato sauce. Bingo. I've just taught you how to make BBQ sauce on your own. Have fun. If you bottle it and make a million dollars, at least give a little shout out to Benito on the back label.

I trussed it up with string and roasted the rack of lamb in the oven with a probe thermometer, and added another layer of glaze two or three times. Note this was all done at low temperatures. A sugar-based sauce will turn black and unappetizing in a hot oven or grill, so slow and low is your friend here. I gave it a final blast under the broiler just to caramelize the exterior, and set aside the rack to rest. The end result was as mild as veal and tender as butter, with a mouth-watering sweet/salty layer on the outside. Brother Paul provided homemade creamed spinach and grilled zucchini to accompany.

I've made a lot of racks of lamb, but I think this one is the best by far. I almost stood up and applauded myself. Perfect balance of flavors, textures, and appearance. This cut is usually served in four rib sections, or as individual chops, but for this preparation I found that carving into double ribs was fun. And the dogs were growling and begging the whole time, which is generally a good sign. (Zoe, pictured above, was well-behaved, but I saw some drool once we cut into the lamb.)

For the wine, I opened up the 2009 Redwood Creek Malbec. $7, 13.5% abv, Mendoza region of Argentina. Smoky, dark black cherry, black pepper, firm tannins, lots of jammy fruit. Great bargain Malbec, not particularly smooth or complex but good for the price point. I fell in love with Malbecs as a wine newbie because of the affordability, and I found that a $7 Malbec was far superior to a $7 Cabernet Sauvignon. Higher end Malbecs deserve to be paired with more serious meals, but the entry level ones go great with pizzas, burgers, ribs, and the rest of the great summer fare we enjoy here in the Northern Hemisphere during the April to August months.


Note: This wine was received as a sample.
Posted by Benito at 12:46 AM

I've done rack of lamb for breakfast, just once. Sometimes you'll see a carved leg of lamb on a big Sunday Brunch, but those tender ribs work quite well early in the morning.

I just came from searching for a good site on Bing and came to this site. I have to say these templates are great. Thank you for mentioning them in your article. I will be sure to add this to my favorites.

We have carried some of those Redwood Creek wines in the past, (had no idea they were making a Malbec though) and while they are quite simple they can be great values. It's a Gallo project right? I think you are absolutely correct when it comes to Malbec being a tremendous value wine....far easier to find a great Malbec for then dollars than a great Cabernet.

That is an excellent post on the lamb and the wine. Good pictures as always.

It turned out very well, and I'm surprised at how well soy sauce complements lamb.

Yep, it's Gallo, but Frei Bros. is in between. Redwood is described as a part of Frei Bros.--I don't know whose project it is specifically, or if having another layer is just part of that curious marketing strategy to hide the Gallo name.

I've had a few California Malbecs, but they tended to be in a higher price bracket and weren't terribly impressive.

I really like the Redwood Creek Pinot Noir & Chardonnay - it's a lesser (and obviously less expensive) version of the Frei Brothers - which I believe it says on the label, but it's worth the $7 and easy for drinking if you just want a glass or two (or it even comes in mini bottles...or at least that's what I had on the plane once.) I didn't know they made a Malbec - perhaps I'll have to seek that out.

It's worth a taste. Let me know if you try it.

The Redwood Creek Malbec was just launched nationally in April, so just ask for it. You can't beat the taste at that price point!!!