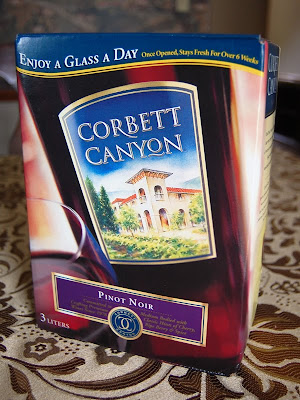 I almost never drink boxed wine. It's not an elitist position, it really has more to do with volume. The box in this review is three litres, or four standard 750 mL bottles. I'd much rather try four different bottles just for the experience of the different flavors. It's possible to purchase bottles up to 30 litres in size, but I've never bought anything bigger than a 1.5 L magnum.

I picked this up at Kirby Wines & Liquors for one peculiar reason. While chatting with manager Angela Moon one day, we were discussing odd wine regions. We pointed out some Austrian and Israeli selections, but I found myself itching for something more exotic. She said the Corbett Canyon Pinot Noir was from Macedonia. Surely not, I thought. American box wine? That's all inexpensive California plonk, right? She fetched a box and showed me the small type on the back. 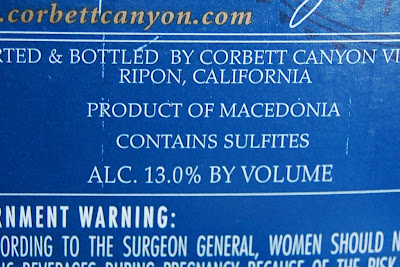 Macedonia is a confusing topic. It's an ancient region of Greece, but here we're talking about the bordering nation that became independent in 1991 as Yugoslavia fell apart. The country uses the Cyrillic rather than Greek alphabet, so the native name is Македонија. There are also (at least) three different pronunciations:

I was going to write a bit about my old philosophy professor who insisted on proper ancient Greek pronunciation for place names, but looking back over what I just typed I realize this emphasis on accent and consonants is just like Hermione needling Ron and Harry about wizard spells.

So how is it? Kind of buttery, light cherry, practically nonexistent tannins. Needs more acidity, more oomph, more character... It's frankly just manufactured and drinkable, but not memorable. But I've got to be honest: I wouldn't mind serving this at a big party full of people that aren't serious wine drinkers. It's a very mild and approachable red wine and while part of me wonders if it's really Pinot Noir, it's an easy drinking light red. Keep it chilled before drinking and after opening; even though the plastic bag keeps most of the air out, after a few days at room temperature it develops a harsher aroma and flavor.

I don't think I'll be buying this again, but I'm glad I tried it, and if someone asks me for a boxed wine recommendation at the $10 mark I'll probably suggest it. And you fellow wine geeks out there, racking up obscure grapes and regions with all the fervor of an adolescent stamp collector (hey, I still get excited about stamps), consider trying this wine to include Macedonia on your list. It's not bad, and I'm interested in seeing what else they have to offer.
Posted by Benito at 12:26 AM

sounds like what the British call "plonk." and it pays to read labels.

I'm just curious about the sequence of events that led to choosing Macedonia for the source of wine, given the availability of cheap grapes in California.

More on odd labeling coming up on Friday...

I hear that in Macedonia, Gamay is pronounced Pinot Noir...

I have no idea on what the percentage laws are for the region in terms of how much Pinot Noir is required to label it as such... Given the name confusion with the Greek region and the battle over who truly owns the name Macedonia, it's tricky to research.

This could just as well pass for Gamay. It's so one dimensional that you can't tell a lot about it from a swirl and sniff. Most really cheap reds are very tannic and sour, and this one is at least easy drinking.

Benito,
I'm new to the site and I'm really liking your posts so far. This was a cool one. I'm always curious about (but also a little afraid of) boxed wines, so I like it when someone actually takes the time to review them. You never know what you'll find. I've heard about Macdeonian wine but never had the chance to try one yet. Interesting post, I'm looking forward to reading more in the future.
Cheers,
Tyler

Glad to have you here, and I don't have many reviews on boxed wines. I am curious about alternative packaging, though, and my favorite so far is the Tetra Pak.

There are some wines that ship in both bottles and boxes, like Cline Red Truck or Big House Red.

ΒΕΝΙΤΟ (you know, your name spelled in Greek letters doesn't do anything exotic),

We actually have an importer of Macedonian wines in Atlanta. Most of his stuff comes from the Tikves region, and they've been doing it for a long time.

Nothing exceptionally complicated, but definitely good values for $13 or so retail. Maybe they'll make it up to Memphis someday (gotta call my buddy at Athens distributing...)

ΒΕΝΙΤΟ (you know, your name spelled in Greek letters doesn't do anything exotic)

Those wines sound interesting, and I promise one of these days I'll give the region a more proper tasting. Eastern European wines are a hard sell around here--we've got no substantial immigrant population from those countries, and from talking to retailers it's tough enough moving South African wines.

I've got an example of labeling in tonight's post I think you'll particularly enjoy.

I like the single bottle usually, as does the reviewer, and was surprised that the boxed pinot noir was not bad.

Today, I bought one and immediately noticed that it tasted like prune juice. Oh, not altogether prune juice, just way too mellow, no bite and the cloying sweetness of prunes. I will be writing to chide Corbett on its lack of quality control. In my area, reasonable pinots noirs can be had for 9.99/750 mL and perhaps I shouldn't cavil about 3L for $16, but if I wanted a cheap wine for $4/bottle, there's always Concha y Toro which I once returned for no recovery, just to make a point.

Depending on Corbett's response, perhaps one more try.