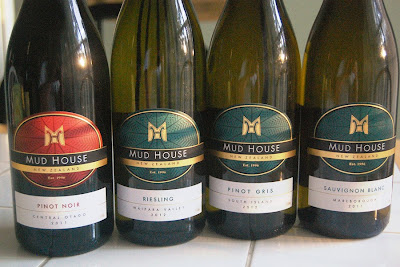 Mud House Wines is the official wine supplier of the Emirates Team New Zealand in the 2013 America's Cup. Having won the Louis Vuitton Cup, they will go on to challenge Oracle Team USA off the coast of San Francisco.

Starting in 1851, the Cup was won by the New York Yacht Club every year until 1983 when the crew of the Australia II of the Royal Perth Yacht Club emerged victorious. I can remember the excitement in 1987 when the US Stars & Stripes 87 defeated the New Zealand Kookaburra III. Since the 80s, there's been a lot of attention and technological development around this particular race, yet it's nice to know that there's still so much enthusiasm around wind-propelled sea vessels.

The nose is dominated by light green apple and honey, while the flavor is crisp and acidic. Very similar to New Zealand Rieslings I've had in the past, and one that would be perfect with a ham sandwich on a picnic.

Rich floral aromas that also include peach and apricot. Ripe white fruit flavors and a clean, round finish. Great with a cold chicken salad full of grapes and walnuts.

A standard New Zealand Sauvignon Blanc with full grapefruit peel aromas and flavors. Touch of spice on the palate and a long, acidic finish. Serve with creamy cheeses and melon.

In addition to a strong overripe strawberry profile, there is a back end of green bell pepper that I wasn't expecting. It starts out a little harsh, but after an hour of breathing the wine softens considerably and is ready for fare like grilled veal chops. It's a bold enough Pinot Noir that it can stand up to some strong sauces and preparations.

Note: These wines were provided as samples.
Posted by Unknown at 12:34 PM

Another good tasting wine to be paired with shell fish and sizzling foods. Thanks for posting.

I lived in New Zealand for some years and had access to a lot of their wines, and found that their wines were nicely brash, very "new world", but mainly a lot of hype, taking the cost for taste ratio into account. Some of the whites aren't bad, but I don't buy them.

What a shame we lost. But i am thankful for Mudhouse for sponsoring the team. I just went out and bought a Mudhouse Pinot Gris to drink tonight. Its a great drop. LOVE THAT PEAR!!! How appropriate.

Are you paying over $5 per pack of cigs? I buy my cigarettes over at Duty Free Depot and this saves me over 60%.