Book Review: The Initiates: A Comic Artist and a Wine Artisan Exchange Jobs

The world of Franco-Belgian comics or bandes dessinées would have seemed odd to most Americans 10-15 years ago, but now American adults are lapping up graphic novels like Maus, American Splendor, The Road to Perdition, Scott Pilgrim, and many others. There's a long tradition in France and Francophone Belgium of comics read by all ages, though some are targeted specifically at children or adults (Barbarella was originally a racy French comic from Jean-Claude Forest). And it's important to note that just because a comic is targeted at adults does not mean that it's pornographic or naughty; my beloved American Splendor is mostly about the late Harvey Pekar complaining about life in Cleveland and dealing with cancer and a dead-end job working as a file clerk. It's not the kind of thing that's going to inspire a little kid to draw grumpy old men in the margins of his schoolwork. 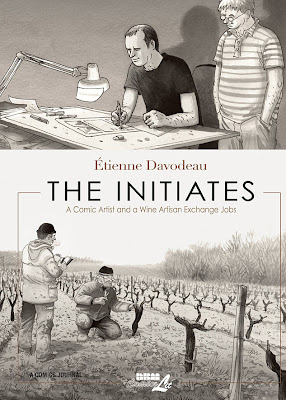 The French title is a little different, referring to ignorants and their story of a cross initiation. The book covers the story of a comic artist Étienne Davodeau befriending a Loire winemaker named Richard Leroy. A lot of the press about this book talks about the two switching roles, but that's not entirely true. Rather, they get to know a lot about each other's work, and while Davodeau is able to put in some real work in the vineyard and winery, Leroy is mostly a spectator to the world of art and printing. That's not a dig against the winemaker--a novice may not be the best grape picker, but it takes a lot of training to do watercolors or run a commercial printing press.

Throughout the course of the story, which covers most of a year, the two teach each other about their passions, and an appendix lists the books and wines that they swapped with each other. The artwork is gorgeous, though entirely grayscale. Yet even in shades of grays and blacks, the artist is able to convey sunshine and perfectly ripened grapes and the odd wine stain on a tablecloth. Likewise, Leroy does an admirable job of explaining complex wine terms and nuances to someone that's never thought a lot about the subject.

It makes for a pleasant afternoon read, and I enjoyed it with a few non-French wines. The translation is quite good and conveyed in easy, colloquial English (I've read many horrible translations throughout the years and can't stand them, but this was beautiful). Highly recommended if you get the opportunity to read it.

Note: This book was received as a sample.
Posted by Unknown at 12:30 AM

I love this. One's own discipline is enriched by learning about someone else's, and it widens the world for both.

Excellent point! Never hurts to step out of your own hobbies once in a while. Somewhere, a similar friendship is playing out between a Civil War Reenactor and a model train enthusiast.