There is a time in your life when you start to become fascinated by genealogy, and for many this time is accompanied by a general thinning of the scalp and the odd grey hair in an otherwise red beard. My interest in wine is not new to my family tree: I had ancestors in California back at the turn of the last century and various fruit wines were produced at home by the many farmers in the woodpile. I had thought that I was the first wine writer in the family until I stumbled upon a forgotten relative from the 19th century. 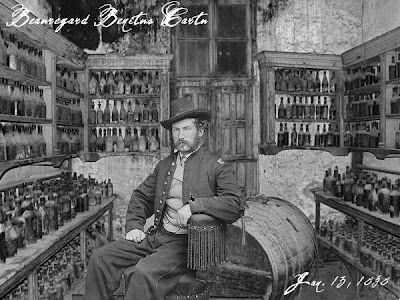 Sgt. Beauregard Benitus Carter, III (1827-1903) was a member of the British Army (St. Lawrence Canadian Regiment). This was an awkward position for him, as England was not involved in the war, but marginally favorable to the Confederacy, while Canadians were generally supportive of the Union. As an observer, he stayed out of actual battle but was ordered to photograph and document the war. A serious wine fan and importer for the Hudson's Bay Company, his focus was rather narrow and of limited use to the Crown. Below are a few of his photos, sketches, and notes. 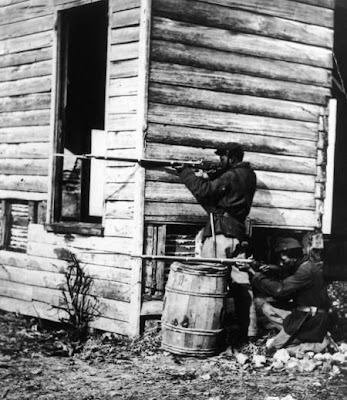 The Union controlled the 19th century winemaking powerhouses of Ohio, Missouri, and New York. As such, there were frequent raids by Confederate forces who had grown tired of low grade whiskey. Here, a pair of Union soldiers defend the last barrel of 1856 Pichon Longueville.

"One may venture to inquire as to why soldiers would shield themselves with the very treasure they were entrusted to protect. Due to lamentable losses in the early stages of the war, barrels were double-walled with a layer of steel between them. While this required much extra work from the coopers, such protection was paramount to ensuring safe passage and storage."
— Sgt. B.B. Carter, III. March 8, 1863. 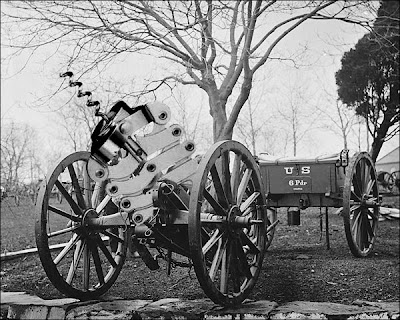 The much stronger, thicker barrels required some new technological advances. The iron forges of Pittsburgh, Pennsylvania provided the first prototype of the M1857a Napoleon Tactical Corkscrew. It took three mules to pull the cart, and ten strong men to position and operate the corkscrew. A half dozen bags of powder were required to pierce through the thick oak and metal plating.

"I wept as a crew of new recruits overloaded the Napoleon and sent the steel worm-screw completely through the barrel. Our precious Michigan Chambourcin flowed upon the ground like so much blood has been spilt in this tragic conflict."
— Sgt. B.B. Carter, III. March 8, 1863, addendum 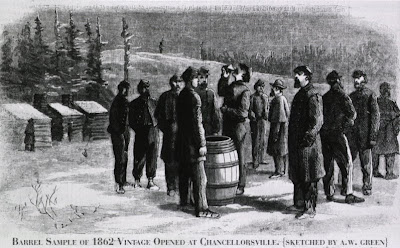 Tastings were not always happy affairs. When supply was scarce, only the generals got to consume wine. But at other times, like in this sketch from Chancellorsville, Virgina, many were able to sample the latest arrival. Regardless of class, the only accompaniments were small slices of salt pork, dry squares of hardtack, and the odd bit of artisan goat cheese plundered from nearby farms.

"A strict hierarchy is enforced during the degustation. Officers are served first and in descending order of rank. Officers are served five-ounce pours, while the enlisted men are provided with three-ounce pours. Some enterprising men have been known to drill out the stems of their glasses or run a section of pig intestine down their sleeves in order to swindle a deeper ration. Those honourless thieves who are discovered are whipped at dawn and restricted from attendance at future tastings."
— Sgt. B.B. Carter, III. November 12, 1864 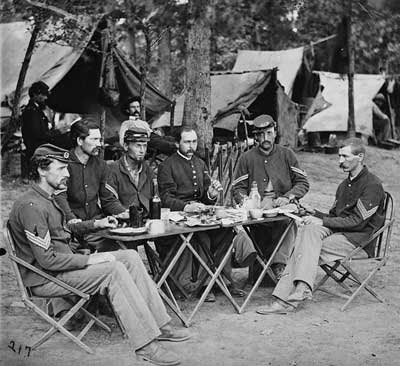 Individual bottles did still exist at the time, and in areas with good access to uninterrupted train tracks and postal service, some were able to maintain their wine-of-the-month subscriptions from back home in Boston or New York City.

"As a non-commissioned officer I often spent time with soldiers of my own rank. Infantry Sgt. Wellington stared at his latest wine-subscription bottle, and mourned, 'For the love of God, our nation, the innocent souls of my children, and all that we hold dear, why on Earth did they send me yet another corked Merlot? Gentlemen, these are the times that try men's souls.' Morale was poor that month during the cholera outbreak, and the last thing those men needed was a spoilt claret."
— Sgt. B.B. Carter, III, undated caption on back of photo


For more on the subject, be sure to check out the detailed History of Canadian-American Wine Photojournalism During the Civil War at the Smithsonian website.

Many apologies to Mathew Brady, Edward P. Doherty, my ancestors on both sides of the conflict, and others too numerous to mention.
Posted by Benito at 12:21 AM

Thanks Thomas! It's amazing the things that are left out of the history books.

Wonderful ... can't imagine how much work you put into this fine parody.

Out of the various ones I've done over the years, this one took the least effort.

Alright! Powerhouses...woo! Way back then!

Excellent to have a bit of this segment of history documented :)

There are some surprising true stories about the Civil War that are about as odd as my fake one. For instance, I love reading about kosher food during the Civil War. You had Jews on both sides of the fight who would scrounge together odd bits to cook their own seder, and packaged kosher foods were shipped out of the larger cities in the North out to soldiers in time for the various holidays.

Yes, Benito, and the flask-making industry was among the most profitable during the Civil War...

Nice article, thanks for the information.

Benito, did you notice that the Kosher story was also posted on April 1?

Glad you enjoyed it, and I didn't notice the date on the kosher article. However, it matches up with what I've read and heard about the subject--NPR did a few stories on it years ago, and the primary sources appear to be real:

I think Manischewitz used the Levy letter on one of its matzoh boxes years ago, but some people complained that it could be seen as pro-Confederacy.

The Union controlled the 19th century wine making powerhouses of Ohio, Missouri, and New York.Alright! Powerhouses...woo! Way back then!Excellent to have a bit of this segment of history documented