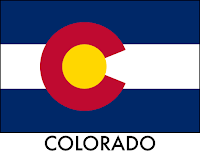 Last year I got to try a fascinating beer by the name of Ten-Fidy. As dark and thick as used motor oil, it was a truly powerful but delicious beer. It's made by Oskar Blues out of Longmont, Colorado, a town north of Denver and not too far from Boulder.

They've made a splash by putting high quality craft and "big" beers in aluminum cans, which provide a few advantages: better seal against oxygen than bottles, light doesn't come in, the overall weight is less for shipping, and recycling is easier. I'm finally getting to try some of their better-known products, and I've listed them in order of body/strength. 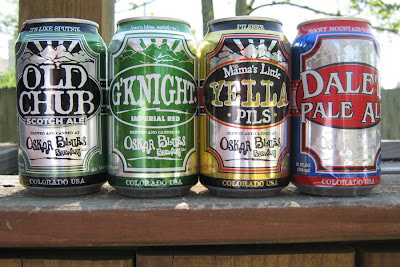 Old Chub Scotch Ale
Scottish Strong Ale
8% abv.
You'd think this would be one of the stronger ones, with a name that sounds like a hefty biker from Aberdeen, but it derives its flavors primarily from malts, not hops, and is quite mild. Like Guinness, it's a good reminder that dark brown beers can be soft and easy even if this particular brew has nearly three times the alcohol of Guinness. It's rich and brown like beef stock, and deserves to be sipped on a cold night alongside a savory shepherd's pie.

Mama's Little Yella Pils
Pilsner
5.3% abv., 35 IBUs
I love a good pun, and this one is hilarious. Pilsner is the Czech style of beer that led to the American Adjunct Lager that's so popular (Budweiser, Coors, etc.), so it's important to go back to the original style and see what was so good before it got watered down. I've listed the International Bitterness Units for those that rate on the scale. (For comparison, Coors Light is around 10 IBUs, barely bitter at all.) This Pilsner has a nice barley aroma with a surprisingly full body. Your eyes are telling you that it's thin and crisp, but it's got depth and structure. The bitterness is going to be a surprise if you're not used to it, but hop lovers will adore it.

Dale's Pale Ale
6.5% abv., 65 IBUs
Nice toasty aroma with a strong bitter profile. The flavor is a little bittersweet, with just a touch of orange peel. Substantial body, and one that needs to be taken slowly. Slightly sticky as it dries on the glass. Perfect with a good salty sandwich like a Reuben.

G'Knight Imperial Red
Double IPA
8.7% abv., 60 IBUs
Tremendous hops with great bitterness and a solid roasted malt flavor. Although it does have a strong start, it finishes fairly smooth and refreshing. This is one of those beers where the second pint tastes even better than the first. It's my favorite of the group with the Pilsner a close second. Get thee to the grill and lay upon it vast amounts of sausage, mostly of the pork persuasion.


Note: These cans were received as samples.
Posted by Benito at 12:01 AM