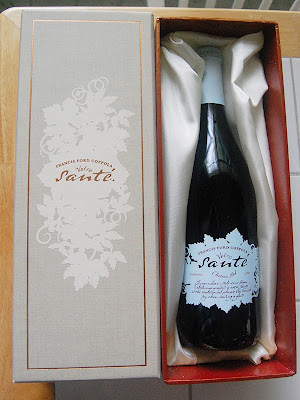 One of the newest labels from Francis Ford Coppola bears the name of a popular French version of "cheers". The paperwork mentions that his paternal often said that before drinking wine. Why would an Italian say that? Because she grew up in Tunisia while it was under French control.

Francis, fratello mio, you can't just leave us with that bit of the story! There's got to be more! The 19th and early 20th century saw a lot of displacement of many people, thrown around the globe for various reasons. The Yorkshire veterinarian James Herriot wrote about a few Mongolians who had been drafted by the Soviets, captured in Germany, and placed on farms in northern England. My paternal grandfather spent a few years after WWII on Johnston Atoll, a tiny speck that is pretty far away from Hawai'i, which is already by itself in the middle of a giant ocean. His job was to study the weather for the Navy, which wasn't too rough in an area where it was the same temperature year-round.

I honored the Italian heritage of the wine with a homemade pepperoni pizza, which I thought benefitted greatly from dried mushrooms and salted anchovies in the sauce.

This is a classic Rhône-style GSM blend, though more French in approach than the Australian versions of this mix. Bright cherry nose with mild, nutty undertones. Gentle tannins, low acid, and an overall light approach create a great bargain wine that should pair well with lots of summer dishes. I found it refreshing when chilled but also enjoyable at room temperature.

I don't know if the box that I got is available for retail sale, but it was one of the prettiest presentations I've ever received.

Note: This wine was provided as a sample.
Posted by Unknown at 12:30 AM