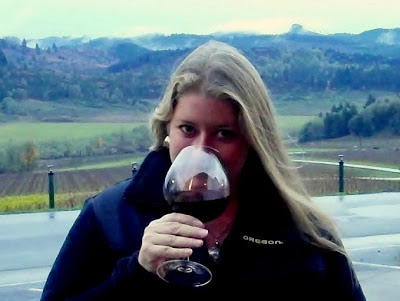 Julia Crowley was the first wine blogger that I met in NYC, after I sent out a tweet asking if anyone wanted to share a cab to our first tasting of Scarpa Wines. Julia immediately accepted and met me in the lobby. However, fellow Snooth PVA bloggers (and former NYC residents) Megan and R.J. soon joined us, and we all took the subway uptown. It was an early precursor to the camaraderie that would follow online for weeks and months after the event. I met so many fascinating writers on that trip, and the purpose of this interview series is to introduce them to my readers.

Important note to avoid confusion: my girlfriend Julia, mentioned many times on this blog, and Julia Crowley are two different people. Additionally, neither were the inspiration for The Beatles, Robert Herrick, or the 1960s TV show starring Diahann Carroll. Hopefully that's clear for everyone.

Julia's site was named the Best New Wine Blog of 2012 by the Wine Blog Awards, and I wanted to get to know some more about her own history and philosophy surrounding the world of wine.

BWR: Did Oregon make you fall in love with wine or did wine influence your current state of residence?

Julia: Oregon made me fall in love with Pinot Noir, but years earlier, a visit to the Loire Valley of France made me fall in love with wine. My sister and I stayed one night in an absolutely amazing castle in Brissac, France, named Château de Brissac. We were the only two people staying in the stunning (and huge) castle, aside from the owners: the Duke and Duchess of Brissac. After an amazing dinner in the main dining room of the castle with the Duke and Duchess, the Duke handed us a bottle of 1998 Château de Brissac Cabernet Franc Anjou-Villages-Brissac along with two wine glasses. He then said, "explore, discover...the castle is yours tonight." We explored for hours - discovering unique rooms, several small theaters, secret tunnels with doorways hidden behind large hanging tapestries, fascinating art work and statues, fireplaces so big we could walk into them...all while enjoying every single sip of the first Cabernet Franc I had ever had. It was an unforgettable evening, and I fell head over heels in love with wine.

Years later, when my husband and I along with our two young boys moved from Florida to Oregon, I was completely unaware of the high-caliber Pinot Noirs in Oregon - until we attended a neighborhood association party at a nearby winery located in the South Willamette Valley named Iris Vineyards. During that party, I tried my first Oregon Pinot Noir: Iris Vineyards 2005 Reserve Pinot. Ultimately, I was blown away by the sheer elegance it displayed, the bright red fruits and distinctive earthy notes flowed onto my palate in seamless, silky waves. Soft acidity added depth of character without overpowering the alluring fruit and earth components. This was the very moment that Oregon Pinot Noir captured my heart.

Although Oregon wine didn't influence my current state of residence, it certainly influences my decision to stay-put and enjoy life in wine country to the fullest.

Julia: I like bonus points, and I love wild mushrooms. The best pairing I've ever had was a match made in heaven between Youngberg Hill's 2009 Natasha Block Pinot Noir and Beef Tenderloin Stroganoff prepared by Chef Chris Czarnecki of the famed Joel Palmer House. Definitely not your typical Beef Stroganoff, this one was made with wild Oregon Porcini and Trumpet mushrooms and served over rice. The earthiness of the mushrooms and savoriness of the creamy sauce paired flawlessly with the earthy finish on the Pinot. It was stellar.

BWR: My first introduction to wine came in high school through some great tastings and a lot of Napa wine that I could experiment with in the kitchen while I was teaching myself to cook. How do you intend to introduce your own children to wine as they grow up?

Julia: They've actually already been introduced to wine - not necessarily to the taste of wine, but to the culture of wine. My boys are just eight and nine years old, but they've always taken an interest in what I do. Not only do they sometimes read what I've written, but when they've come out to the vineyards with my husband and I (whether it's during a family picnic in wine country or to join me while I interview winemakers or vineyard owners), they are keen to what is going on and sponges to their environment. A couple years ago, when my youngest son was six years old, he correctly identified a cluster of Pinot Noir.

BWR: I also see posts on your blog from Sarah Tunnell. Is she an employee, a friend, a co-collaborator, or what? And do you set deadlines or is it more on a contribution basis?

Julia: That's a tougher question than one may think. I met Sarah through a friend, Heidi Tunnell, who owns a local bakery/restaurant/catering business in a very small town just south of Eugene, Oregon, named Creswell. Heidi, who earned her culinary degree at the prestigious Culinary Institute of America in New York City, focuses on local, sustainable products for both the menus at the restaurant and her famed summer Barn Dinners, which take place on her family's farm in a turn-of-the-century big red barn. During her barn dinners, where each course is paired with a wine from a local winemaker, the farmers, fisherman, winemakers and all those involved in each dinner are present to talk about their farms, food, vineyards and wine. At her restaurant, Heidi has the absolute best wine list in all of the Southern Willamette Valley. Twenty-something Sarah Tunnell, who recently became Heidi's sister-in-law, is the front of house manager at Heidi Tunnell Catering Company and also helps with building the notable wine list. Sarah is not much older than the current drinking age, so although she has an amazing palate for someone her age, she has a tight budget, and she's great at seeking out local, stellar wines that are under $20 dollars. With a desire to write about her Pacific Northwest budget-oriented discoveries, The Frugal Wino on WineJulia was created. Much like me, she loves wine and loves to write about it, so she writes the Frugal Wino piece once a week - just for fun. 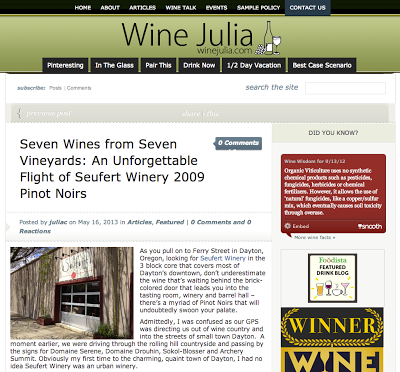 BWR: How did you like running your own wine bar?

Julia: It was the hardest job I've ever had. From tasting each and every wine that went on the shelves to shopping for and cooking all the food, I did everything myself. Bookeeping, paying the bills, restocking the shelves, mopping the floors and cleaning the bathrooms were just a few of the many jobs it takes to run a business. It was as difficult, however, as it was rewarding. I was very proud of what I had built and accomplished. Within just nine months of opening my doors, my wine bar was voted one of the top five wine bars in Lane County, Oregon, and I believe that had a lot to do with my decision to focus solely on Oregon products. Everything in my shop, from the wine and beer to the artwork and furniture, was produced by local winemakers, farmers and artisans. I'm sure that my focus on local products is what got me through the recession. When word got out that I was supporting locally, locals in return, supported me. Julia's, was one of very few that had major success in such financially rough times - I believe wholeheartedly that my success was due to the passionate dedciation I had for Oregon's products. Aside from easing my way through the financially rough economy, I made some fantastic relationships with my regular customers, two of which actually purchased Julia's as soon as I put it up for sale.

Although I was teary eyed when I handed over the keys to what I had worked so hard for, there has been nothing more rewarding than spending time with my boys. My writing is done at home, on my own schedule, and I never miss a baseball game or a camping trip to the Coast. I couldn't be happer.

BWR: How did your experience with wine blogging change after winning the award for 2012's Best New Wine Blog?

Julia: After receiving the Best New Wine Blog Award, my experience with wine blogging went from an unsustainable passion to an affordable and exciting dream come true. Prior to the award, I was limited to writing only about what I could afford to buy and how far I could travel with the funds I had available. The award has brought on numerous wine samples (from around the world) and multiple media invitations from around the globe, providing me with content that is fresh and intriguing. Just last month, I was invited by the owners of Oregon's Duck Pond Cellars to celebrate their twentieth anniversary - we toured their vineyards, ate an ambrosial lunch in their greenhouse, sampled twenty year Pinot Noirs alongside barrel samples, had an amazing dinner prepared by a famed chef and ended our day with a stay at the beautiful Allison Inn and Spa in Newberg, Oregon. A few days ago, I received an invitation to Murcia, Spain, to explore the Jumilla, Yecla and Bullas wine regions, an area of Spain I've never been to. Words cannot describe the excitement I have about this opportunity to learn about and explore a wine region that I'm totally unfamiliar with.

I am so thankful for being recognized, it is truly an honor to be surrounded by so many great and talented writers. I've learned so much, yet I still have so much to learn. The path ahead is an exciting one, for sure. There is one thing that hasn't changed, however, I'm doing what I love, and I love what I'm doing.

Many thanks to Julia for participating in this interview, and be sure to follow her at Wine Julia and @WineJulia.
Posted by Unknown at 12:30 AM

Glad you enjoyed the interview, and I hope you enjoy reading both of our blogs.