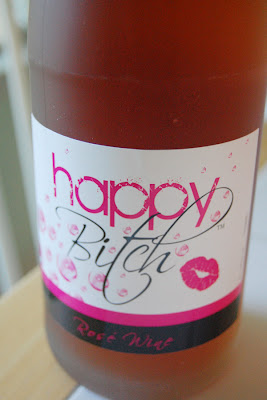 New York based Happy Bitch Wines is a joint effort between Keryl Pesce (Happy Bitch) and Debbie Gioquindo (Hudson Valley Wine Goddess), making this what I think is the first wine I've ever tried that was made by a fellow wine blogger. The tag line says, "Pairs well with girlfriends and great memories." After presenting the bottle to my girlfriend I received a black eye in return. They use solid glass up there in the Empire State.

As my vision cleared, I noticed the small print on the business card: "Designed by women, for women." So we're talking more Sex and the City girlfriends rather than showing up for a date and dropping the b-word. I'm not going to devolve into a Noam Chomsky lecture about taking back a hurtful word and redefining it with pride, but while this wine isn't marketed directly at me it is fun, and an important part of demystifying wine for the 99% of the world that doesn't take wine too seriously. Besides, there's a bunch of weird European wine names that involve widows and bastards and the tears of Christ, so I think there's certainly room on the shelf for a Happy Bitch.

The wine is made by Sisterhood Winery of Washingtonville, New York, just about sixty miles north of New York City. Wine grapes have been grown in the Hudson Valley since French Huguenots planted the first vines back in 1677. The history of the region seems to have followed the same pattern as wine regions like Ohio, with steady growth in the 1800s, lots of communion wine production, the crash of Prohibition, followed by a more recent renaissance as it's become easier and more legal for farmers to get back into commercial winemaking.

The nose is stronger than you'd imagine, with a deep overripe strawberry aroma. Slightly fizzy and secured with a bottle cap, it has a dry but dark fruit flavor with a crisp, clean finish. It reminds me a lot of some of the sparkling reds of Italy. Serve with comfort food, appetizers, and canapés. I'm thinking this would be a lot of fun at Thanksgiving, where it would be incredible with stuffing and green bean casserole and is mild enough to offer a glass to your slightly younger than 21 cousins as well as your slightly older than senior great aunts who have a good sense of humor.

P.S. The lovely Julia really enjoyed the wine, and no domestic violence was involved.

Note: This wine was received as a sample.
Posted by Benito at 12:28 AM