After the Wines of Scarpa tasting, my fellow bloggers and I were dismissed for a half hour while hundreds of wine glasses were swapped out to make room for the Oregon Wine Board dinner at the Peking Duck House in Manhattan. We were joined by three winemakers, one at each big table. There was the mystic bearded Brian O'Donnell of Belle Pente, the quick and verbose Jim Bernau of Willamette Valley Vineyards, and I was sitting with Earl Jones of Abacela. Earl reminded me a lot of some of my great uncles. His background is in the sciences, he's got a passion for Spanish grapes, and his Twitter handle is @EarlofLaMancha. More on them in a bit. 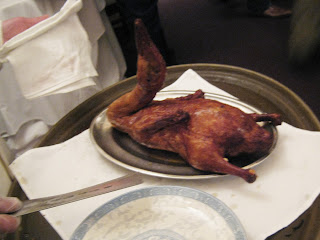 The restaurant is a monument to the old style 1950s Americanized Chinese cuisine. Waiters in tuxedos, all the well-known dishes served in a classy manner, and the big production and display of Peking duck complete with the head thrust up in the air with a nod to A Christmas Story. My own attempt at making Peking duck at home was not a success, but I was happy with the result at the restaurant. The skin was crazy delicious. The rest of the dishes are something of a blur, as I hadn't eaten in 24 hours, had been up since 4 a.m., and was enchanted by the great storytelling from the winemakers. I was a little disappointed that most of the meal could not be eaten with chopsticks--there's a whole branch of my family that's Chinese and I've been versatile with 筷子 since the age of six. There was that residual fear of "I'm a southerner in New York and I need to demonstrate that I know what I'm doing, also, thanks to the Civil War I had to apply for a visa to enter the state". Once the bowl of fried rice arrived I engaged in a little Guangzhou-style shoveling between sips of Pinot Noir.

One blog post can't contain everything that we experienced at this dinner. You'd really need to write a book to truly communicate all of the tasting notes, background details, and stories shared that evening. One I will mention is that Brian talked about the winemaker Jimi Brookes who died before harvest at the tender age of 38. Six other Oregon winemakers pitched in and devoted one day per week to make sure that all of the grapes got picked and processed properly, and a trust was set up for his young son. You'll find similar stories around the wine producing regions of the world, but Oregon is unique in America for being mostly comprised of this particular communitarian group of small family wineries that help each other out. 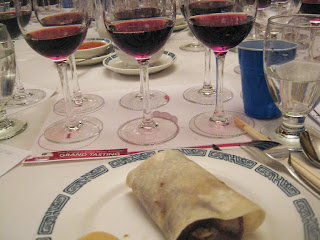 Among my favorites of the night were the Abacela Albariño, the WVV Estate Pinot Noir, and the Cliff Creek Syrah. I had a few one-on-one conversations with Earl, mostly about cotton farming in Missouri and the labeling laws for American "Port". We also bumped into each other a few times throughout the weekend at the Snooth PVA event and on a random street corner in the city. These guys were so friendly and engaging, and they all welcomed us to come and visit their wineries and offered the use of a few beater cars around the farms if we needed transportation. Like my trip to Preston in Sonoma, I fear that if I go out there I might drop all of my Memphis ties and settle down as a cook and goat-herder for some small Oregon winery. 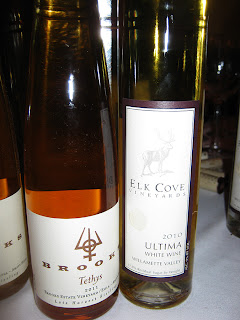 Oregon is also unique in a few other regards. You've got winemakers making serious Vermentino and Albariño far from their home soils. There are temperature swings that are much broader than California, and when you drill down to microclimates you've got mountains and valleys and deserts and other biomes in a relatively small area. It's also the only region in the world where Pinot Gris is the most-planted white grape--Friuli is #2 and Alsace is #3.

Overall I was impressed with the wines, and while I could share a ton of technical details I found this particular tasting to be the most meaningful of all that I attended during that weekend in New York. The winemakers opened their hearts and souls to share their love of winemaking and stewardship of the earth. Likewise, by that point in the evening all twenty of us had been together just long enough to start having some real conversations, and what is amazing is that we've had lots more communication between each other since then. You can read their stories about this same tasting through the following links below these micro reviews of the wines: 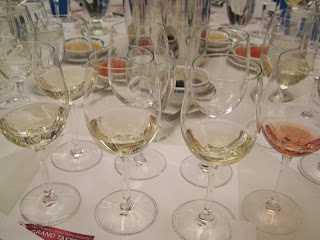 Note: This trip was provided by Snooth.

I love how you capture such different elements of the evening. Also, I'm so happy you brought up the Brooks story. Such an amazing story! And that is what I remember about living in Oregon, the camaraderie between producers. It's not a gimmick, people are really that helpful and caring there!

I think I ran into the same problem as you--so much to tell, so little space. Going out to Oregon with my grandfather and younger brother at the age of 12 was a magical experience. Wild mushrooms, yellow cherries, and *really fresh* salmon? Grandpa, you can leave me here.

During that trip I spent a lot of time in the Cascades with my great-great uncles and visited small logging towns. Add in the John Day Fossil Beds and I was even more excited about the state. Enjoying the small production wines of the region just reinforces the good feelings I have about Oregon.

That is one of the best (and most popular among wine folks) BYOB places in the city... love the Soter btw...

Someone lovingly referred to it as "Soter Pop". It was a great start to a wonderful lineup.