I found myself craving this salad tonight, though I did not gather the dozen ingredients necessary to make it. I still have fond memories of this salad, and will make it again soon.

I was scrolling through Facebook when I saw that a friend named Juli Eck (who graciously invited me to a private wine tasting a while back) had posted a photo of something called a Stetson salad. It looked good even though I had no idea what was in it. It was obviously something like the famous Cobb salad, in which the ingredients are laid in stripes. The idea is that the waiter tosses the salad tableside and serves portions to each diner, but that's rare these days, and the salad plates aren't big enough for proper tossing, so you see people just eating the salad with an attitude of "Oh, here's a bit of avocado, next I get to try some bacon! Can't possibly try them at the same time..." 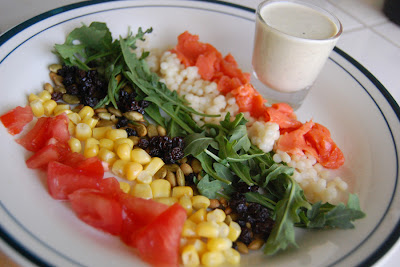 The Stetson salad comes from Cowboy Ciao, a Scottsdale, Arizona restaurant with an eclectic, creative menu. The salad appears to be their best-known dish and is no doubt widely imitated around the country by other restaurants, dinner party hostesses, and humble wine bloggers. I've never been to the restaurant but the menu looks solid, and the wine list weighs in at a hefty 94 pages with 3,200 different wines.

There's no bed of lettuce here, and I've seen variations that call for putting the whole mess on a bed of quinoa. There are many recipes, and the one I used seemed to be closest to the actual restaurant photos. My only substitution was the use of fresh corn kernels instead of dried kernels (not like popcorn, but more like dried green peas or other healthy snacks). I couldn't find dried corn, but I think outside of additional crunch I wasn't missing too much. If you're making this for a lot of people, put it all on a big platter, mix, and then serve. If you're dealing with multiple people who dislike or are allergic to one ingredient (but of course, it will never be the same ingredient), lay out the elements and let them build their own. I made mine with everything. 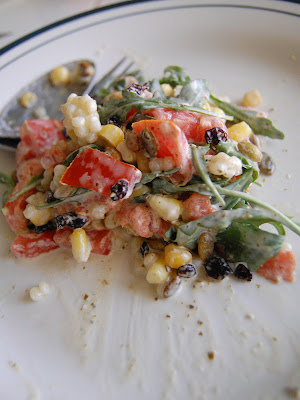 Here you have diced tomatoes, corn kernels, toasted pumpkinseeds mixed with dried currants (most recipes seem to leave out this step), arugula, Israeli couscous (I made mine with garlic and chopped shallots and chicken stock), and the final touch--smoked salmon.

(Let me step aside for a moment and say that, as much as I love this salad and as delicious as it is, it's a lot of work and requires a lot of ingredients. So you either want to make this for a lot of people or be prepared to have variations of it for days afterward.)

In accordance with the dressing recipe I made a batch of aïoli and mixed it with diced shallots, buttermilk, and basil pesto (I just used jarred pesto, there were only so many things I could make from scratch before noon). Mix everything together and pour over the salad, and then take a fork and spoon and gently toss everything together. Unlike many of the creamy salads that sit in the deli counter for hours, this remains really fresh with easily distinguishable flavors and textures. And what a combination! No one element overpowers the other, and it really stands as a meal on its own. I'd intended for it to be a first course, but after an initial round of cheese and olives, the salad completely filled all three of us.

I couldn't wait too long to try this mysterious bottle from Wines of Germany. It's from the Schloss Hallburg in the Franken region northwest of Bavaria, and no, I don't know how much it costs. I don't even know if it's available in the US. I've seen prices from €16 to $45, so take from that what you will. 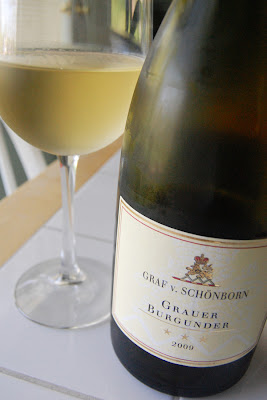 The vineyard is owned by the Schönborn family, an noble line that goes back to the 12th century and includes a lot of Catholic prelates, including the current Archbishop of Vienna. The Baroque castle Schloss Weißenstein in Pommersfelden was built for Prince-Bishop Lothar Franz von Schönborn in the early 1700s. The family formally registered their wine business back in 1349 and it is currently managed by S. E. Paul Graf von Schönborn, who studied banking in the United States.

It's a bronze-tinged late harvest Pinot Gris with lovely floral aromas like jasmine and white rose. Good acidity with just a touch of sweetness and a light apple flavor like a Golden Delicious. It has a firm, rich body and substantial weight . It worked well with the salad, but this is such a unique experience that I'd suggest enjoying it on its own with light appetizers of German cheeses and white sausages and a few fellow wine enthusiasts.


Note: This wine was received as a sample.
Posted by Unknown at 12:30 AM