I was immensely proud of the way this meal turned out a year ago. I may have even performed an Irish jig in the kitchen in defiance of my Scottish Presbyterian upbringing. It was incredibly satisfying and well worth all of the work on the homemade pasta. 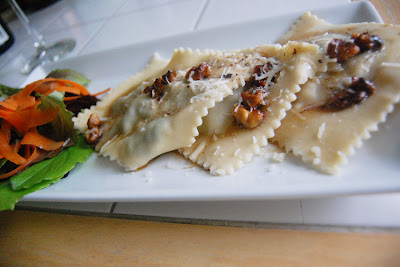 It's rare that I stand beside a dish I've cooked and say, "That was amazing." While I'm not insecure or self-deprecating, often I can point to things I could have done better. But with this meal, I not only thought it was beautiful but also so perfect from a flavor perspective that I walked away from the table saying, "I ROCK! Come with me Julia, I need a nap."

Homemade pasta filled with rapini and braised rabbit, topped with browned butter and toasted walnuts, and served with a little salad topped with carrot shavings and a fresh red wine vinegar/honey vinaigrette. I made the ravioli in a variety of shapes (triangles, half moons, circles, squares), but all of them were fairly large and boiled to perfection. I'd considered using the braising liquid of tomatoes and white wine for a chunky sauce, but felt that these dumplings needed something more special, and browned butter is one of the most delicious things on the planet. Such a meal begged for some serious Pinot Noir... 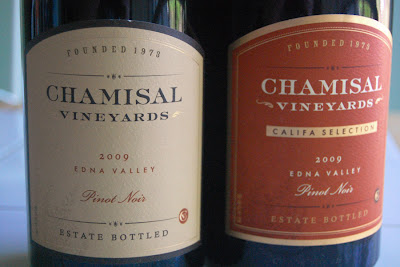 Chamisal Vineyards was founded in 1973 as the first vineyard in the Edna Valley AVA of San Luis Obispo. The name of the winery derives from the Adenostoma fasciculatum or chamise flowering shrub that thrives in the chaparral biome.

Mild aroma of wild strawberries and a smooth mouthfeel with an aftertaste of raspberry seeds. Low tannins and a long finish. I'm sipping this as I write the post on the second day and it holds up so very well...

Really spectacular. Very similar to the prior wine in profile, but more earthy and far more refined. Smooth as silk and each sip was a true delight. More of the wild strawberry character, with hints of mushroom and great minerality. Highly recommended.


Note: These wines were received as samples.
Posted by Unknown at 10:55 PM