Having Fun With Wine: the Sippy Cup 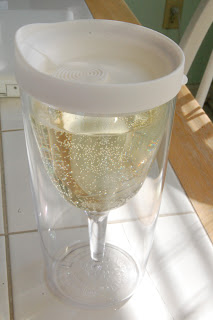 Going to Europe when I was 20 was an instructive trip in many regards, but above all else I learned not to take wine too seriously. It doesn't always have to be solemnly decanted from a bottle into a crystal glass. Often it was poured from crockery into a tumbler, yet we enjoyed it just the same.

There are times to take wine very seriously, but for the most part, wine is food and there's no shame in eating off paper plates from time to time. I had that feeling while trying out this little gadget recently... The full name is the the Vino2Go™ wine sippy cup tumbler ($16), but around the house we just called it the wine sippy cup.

I felt a little odd drinking from it (I kept expecting a hot coffee-flavored beverage), but it was still enjoyable with the mild Vinho Verde that I used in the testing. Julia found it to be fun and I let her keep the sample glass for her own amusement. The inverted wine glass style appeals to the math geek in me. I can't say that there are a lot of social occasions where I might use this (though BBQ season is coming up), but Julia highly recommends it for Bachelorette Parties and Girls' Night gatherings. The Vino2Go comes in many different colors that may just match the shade of bridesmaid dress you've selected for your wedding.

Note: This product was received as a sample.