UPDATE: The movie is now available in DVD form from harvestmovie.com 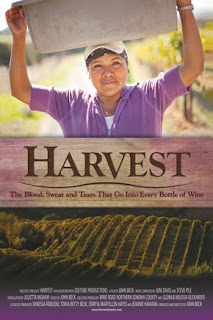 A while back I got the opportunity watch an online screening of the 2012 documentary Harvest by director John Beck (imdb.com). He's originally from Nashville, TN but worked as a staff writer for the Sonoma-area Press Democrat for many years.

The film covers the rainy 2011 harvest season in Sonoma, but the focus is on the Mexican migrant workers who pick most of the grapes that turn into the great wines of the region. Because the story is told through them, much of the movie is in Spanish with English subtitles.

I come from cotton farmers on both sides of my family, and while that industry does not have the same romance or cachet as viticulture, when you get down into the fields a lot of the work is the same. Cotton farming benefits from efficient automation these days, but great wine requires hand picking of grape clusters in much the same way that my father and grandparents picked cotton by hand in the fields of 1950s Missouri. In fact, one of my favorite parts of the documentary was watching the tourists coming in, paying lots of money to pick grapes. My long retired from farming grandmother sold some cotton bolls to Nashville-area craft stores a few years ago and was amazed at how much city folk would pay for a single blossom when she'd hauled hundreds of pounds on her back every day just to keep the family fed.

In the spirit of the American dream, my father worked hard so that my brother and I did not have to suffer under the heat of the sun and worry about if a fox getting into the chicken coop meant a scant Sunday dinner. Likewise, a lot of the people profiled in the movie are working hard to take care of the next generation as well as families back home in Mexico. One of the picking crews is entirely female, and the movie also profiles Reynaldo Robledo, the first migrant worker of the modern California wine era to own his own winery.

The film is an insightful look into the amount of hard work, heavy labor, blood, sweat, and tears that go into making wines. So many people think that winemaking is all about pastoral scenes of picnics and lute-playing with occasional photogenic moments of plucking a grape from the vine, but when you spend real, honest time with winemakers and get into the fields, you learn that most of the time is spent dragging equipment through the mud, changing belts on tractors, and occasionally borrowing equipment from the neighboring winery. Take a moment to appreciate all of that hard work the next time you lift a glass.

The trailer can be viewed online, and I will update this post when it is available to be viewed on iTunes or via DVD.

Note: This movie screening was provided as a sample.
Posted by Benito at 12:30 AM