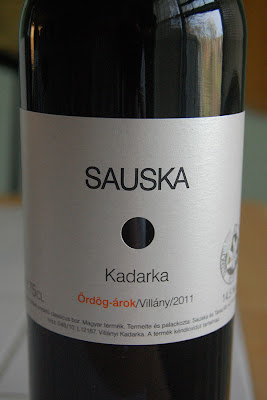 After my recent review of some wines from Sauska in Hungary, I got a note back from Andi & Christian Sauska. They saw my brief mention about the lack of Kadarka in the sample lineup (I wasn't complaining!), and while that wine is not currently available in the United States they offered to send me a bottle. I was more than happy to give it a pour.

I first had Kadarka as one of the blending grapes in Egri Bikavér, the famous "Bull's Blood of Eger", but I've never had it on its own. The grape is most commonly associated with Hungary but is also grown in Bulgaria and other nearby countries. It's not as popular as it once was in Hungary, but I think it's still worth a search for any wine lover with a sense of adventure. There's more to the world of wine than Chardonnay and Cabernet Sauvignon!

The Hungarian wine industry suffered in both production and reputation during the long years behind the Iron Curtain, but the past two decades have seen a resurgence of traditional quality winemaking. So many Americans are wary of Eastern European wines, but if they would just taste a great Tokaji or Kékfrankos, you'd see Hungarian wines on lists throughout the US.

Kadarka is a troublesome grape that is prone to disease, and its finicky nature and mild body inspire obvious connections with Pinot Noir. This one has a lovely bluish-purple hue in the glass, with a very mild plum aroma with light hints of cedar. The body is gentle with bright pomegranate flavors and an easy, mellow finish. Medium tannins and an overall forward fruit persona without being tart or sweet. I enjoyed it with smoked brisket and pork shoulder, and found that it was a great accompaniment to the traditional southern fare.

Note: This wine was received as a sample.
Posted by Benito at 12:30 AM