I've gotten a lot of new readers in the past couple of weeks, and while I will always continue to write three new posts a week, I'm thinking about dusting off some of my favorite older content for those other days. This is a bit of an experiment, and let me know what you think.

This post was part of a fun series about cooking in hotel rooms, from 2007 when I was a traveling corporate trainer. Enjoy!

I'm on the road again, and found myself spending most of a Sunday afternoon engrossed in a Survivorman marathon on the Discovery Channel. For those of you not familiar with the premise, the production team drops a Canadian guy into some uninhabited environment and he lives off the land for a week. The attempts to get food and water are quite entertaining, such as trapping a packrat in the desert and eating it bones and all. 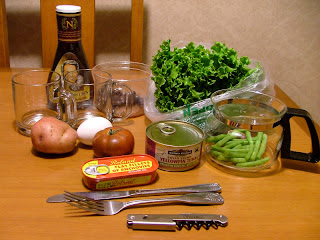 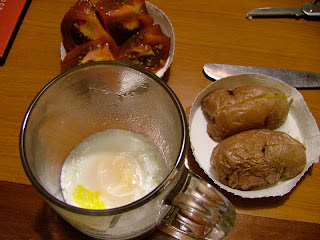 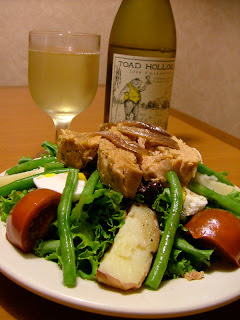 Here's the finished product after assembling the various components. I was really quite surprised at how delicious it turned out. The individual components maintained their flavors, and the beans were amazing--a sweet and crisp counterpoint to the rich texture of the tuna. The egg was great and this is a quick and easy technique I might use in the future when I just need a single boiled egg for something.

Overall I rate this a success. It was delicious, nutritious, and fun to put together.
Posted by Benito at 12:30 AM