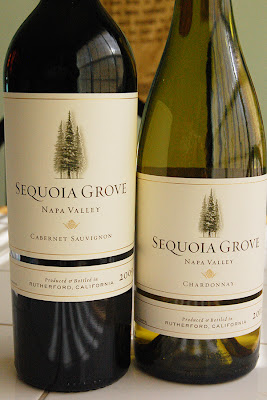 When I was a kid, our Scoutmaster had a particular interest in tree identification. He was a carpenter by trade and every tree was evaluated for its use: fences, frames, boats, cabinets, etc. Want some great moulding that will take a stain properly? You're going to want some poplar for that, and you can identify a tulip poplar by the shape of the leaf, and it's also the state tree of Tennessee.

In 1989, my grandfather took my brother and me out west for a long road trip that involved time in Oregon and northern California. Because I was 12 that summer, I wasn't visiting wineries at the time, though I think that my great uncles in the Cascades would have been up for it. At one point, we got to visit Prairie Creek Redwoods State Park and for the first time I got to see the mighty sequoia in its native habitat. (Oddly enough, an Assistant Scoutmaster back home was raising a sequoia sapling in a flower pot, trying to see how long he could keep it alive in our non-coastal biome.) It was a similar experience to the first time I visited Chicago. I'd seen tall buildings before, but good God those are huge.

I think my favorite part of the walk with the park ranger was about the death of a redwood. It falls over, clears out a lot of trees in the process, and opens up a wide swath that allows some light to hit the ground. The trunk gets devoured by bugs and fungi and turns into rich soil, and later, tiny redwood cones will fall down and land in that matrix. And thus, new redwoods will grow in a straight line along the corpse of that fallen giant.

Sequoia Grove Winery is based a bit further south in Napa Valley, surrounded by some of the namesake trees. Something I loved about visiting Sonoma was how much the wineries treasured their trees. Some had olive trees or fruit trees for making other food products, while one had a cork tree that had been brought over as a sapling from Portugal. In all cases they were beautiful and well cared for.

Bright Bartlett pear aromas and flavors with a few nutty notes underneath. The wine spends some time on French oak but does not have major vanilla elements. Ultimately restrained and made in a more Burgundian style. Highly recommended with some smoked trout and duck liver paté.

Black cherry and leather aromas, combined with a hint of chocolate. Deep and dark body with a little spice and pie crust flavor. Good now but should improve over the next 2-3 years. Serve with roast pork loin and stewed figs.

One of the great Old School Napa wineries, unduly neglected. Perhaps with a new marketing firm it will get wider recognition. The new label is a little blah though.

I was not really familiar with them before getting the samples. I just looked up some older vintages, and I really like the large format bottles with the tall trees going for the entire height of the bottle.

From what I understand, all that separates Sequoia Grove from Opus One is a barbed wire fence. So, they're sitting on some premium land.

I love that about so many Napa/Sonoma wines. "They can't put it on the bottle, but this guy buys his grapes from _____ and they're really spectacular." On the other hand, you've got Burgundy where walking across the street makes a massive difference in the price of the wine.