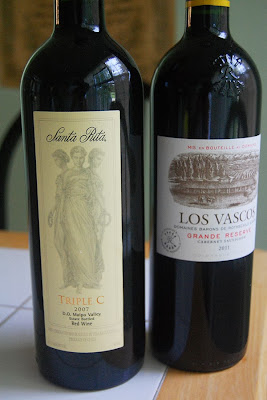 These wines were tasted during a recent Wines of Chile online tasting. A third bottle was also provided, but I already covered the Montes Alpha last month.

The first one is from a vineyard in Chile that was developed in the 1940s by Basque immigrants. Even after Domaine Barons de Rothschild-Lafite took over operations in 1988, the Los Vascos (the Basques) name was retained. In some respects, it makes more sense for a European wine company to have an operation in South America rather than North America; the opposing seasons allow you to have two harvests a year. And there are experts in certain fields (e.g. establishing new vines) that can shuttle back and forth across the equator to catch the right season in both hemispheres.

The dominant profile of this wine is black cherry, but that Carménère really shines through with lots of green bell pepper. On the palate there are deep black fruit flavors with a little leather and cedar. A great steak wine, and a tremendous bargain at $15. 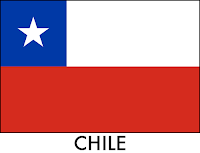 It's unusual to receive samples that have some age on them, though every once in a while I get a chance to try something that has been properly stored for a few years. On top of that, something that I learned from the Bodega Catena Zapata tasting is that the trip from South America to the US can artificially add a year of aging, even if the bottles are stored in the cool bottom of the container ship where the cargo is under the water line. The tannins have mellowed in this wine, but what remains is a surprisingly tart raspberry flavor. However, there are delicate and earthy aromas that can still be enjoyed as the wine breathes and opens up. Any lover of Cabernet Franc should seek this out, and there are still bottles of the 2004 vintage out there. I know that I'll be snapping up bottles of the next release that comes out.