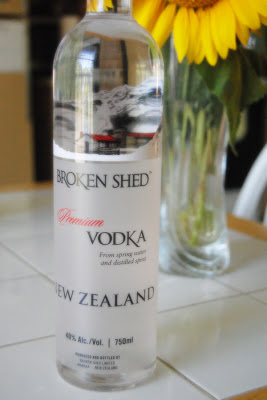 Every year there are more and more premium vodkas coming on the scene, and much like bottled water the producers seek to attract customers through packaging and an exotic origin. Ultimately vodka is just 40% alcohol and 60% water. The alcohol can be distilled from anything and the water can either come from glacial ice or the tap. (I'm waiting for the first commercial Antarctic vodka. I say commercial, because my high school physics teacher flew there a lot as a US Navy pilot in the 70s and used to make a drink with PGA swiped from the scientists, snow, and orange juice crystals called "Absolute Zero".)

Broken Shed surprised me, and not because it uses spring water from both islands of New Zealand. No, what really struck me was that it's distilled from whey, the liquid byproduct of cheesemaking. Whey is rich in protein and lactose, a sugar. The Mongolians have been making airag from mares' milk forever, and variations on fermented milk exist throughout Asia and the middle east. Given the Kiwi origin of this spirit, I'm going to guess sheep's milk was the source of the whey.

Like Grey Goose, this bottle features a frosted bottle but with icy mountains instead of big waves. It's a tall, slender bottle with a cork stopper--an elegant touch in comparison to the usual thin metal screwcaps. While I like screwcaps on wine, with spirits I like stoppers, whether natural or synthetic. A bottle of wine will be consumed within a few days of opening, whereas a spirit may hang around for years. I've had leakage issues with screwcaps, and besides the mess that also means that other things are getting into the bottle.

The vodka is crisp and bracing on its own, though when chilled and mixed in a cocktail it takes on a--dare I say it?--creamy smooth quality. Maybe it's just the power of suggestion, but it does blend quite well into martinis, Salty Dogs, and even kicks up a bit of homemade lemonade quite well.

A bit of doggerel, because I couldn't resist:

Little Miss Muffet
Sat on a tuffet
Staring at leftover whey.
"If this can be distilled
My bottles can be filled
In a most delectable way."


Note: This bottle was received as a sample.
Posted by Benito at 12:56 AM

I did enjoy that "La Bomba" wine that came from the mountains near the atomic test site in New Mexico.

I will taste this "Broken Shed Vodka" :D:D:D
wine and vodka is best beverages.
stoli hot, elit and sticki is very good too
http://bestvodka.net/stolichnaya-stoli-review/