One of the overlooked Christmas classics is The Thin Man. OK, it's not really a Christmas movie, but is set during the season and has a lot of partying and humor, so we'll let it slide. 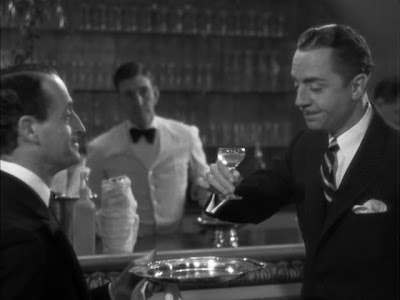 In this scene, William Powell (as Nick Charles) lectures the bartenders on martini theory before sampling his fifth of the evening, just a warmup to #6. A fan of the shake method, Nick says, "The important thing is the rhythm! Always have rhythm in your shaking. Now a Manhattan you shake to fox-trot time, a Bronx to two-step time, a dry martini you always shake to waltz time."

I considered counting up how many cocktails and other drinks he consumed during the course of the 90 minute film, but he was never empty-handed and frequently referred to prior and subsequent beverages. What does he do if Nora wakes him up in the middle of the night? Fortunately there's a little bar right in the bedroom! I'm pretty sure that Asta the dog was the only sober character. 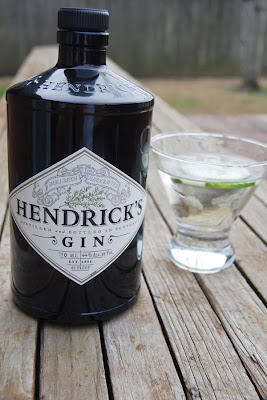 While I don't advocate Nick's dawn-to-dusk drinking, I did find myself craving a martini during the movie. And since I was housesitting at Paul's, I helped myself to a bit of the Hendrick's Gin, made in Ayrshire, Scotland (in the southwest near Glasgow). Gins are made with a wide variety of spices and obscure ingredients left over from the old days of Dutch expeditions to the tropics, but Hendrick's is unique. Its flavor and aroma come from rose petals and cucumbers in addition to the more traditional coriander and juniper. It's smoother and has a rounder mouthfeel than most gins, and the scent is so alluring you can sip it over an hour and never get bored.

I made a 4:1 martini with Hendrick's and the European-style Noilly Prat (stirred slowly... adagio). And if I garnish Hendrick's with anything, it's going to be a thin slice of cucumber. I think olives would clash, and lemon peel would obscure some of the more delicate aromas. The cucumber is mild enough to just enhance the flavors already there, and it floats gently on the surface of the cocktail.

If you haven't tried Hendrick's, or if you've been turned off by gin in the past, I'd urge you to give it a try. Many of your better restaurant bars carry it (in fact, that old-fashioned medicine bottle is a great sign that you're at a quality bar), so order a martini or a shot. I think you'll be pleasantly surprised.

Hendricks is one of our favorite gins, along with Junipero, from Anchor Brewing in San Francisco. (also look for their Old Potrero rye.) these are not cheap gins, of course, so we keep a bottle of Amsterdam in the freezer just in case.

I adore that Hendricks. We keep a bottle on hand at the house at all times. It was the gin that actually got me into drinking gin. Great post.

Another, "Hooray for Hendricks" here, such a lovely, gentle Gin with a soft, full texture. I don't always have a bottle in the house but only because when I do, the damn thing is gone far too quickly!

I've yet to try the Junipero--putting it on the list of things to try at some point.

It's almost dangerous how soft and tasty Hendrick's is. I even like to have a little of another gin first (like the aforementioned New Amsterdam) to savor the contrast.

WOW ! A totally different and most pleasant taste, and no bitter aftertaste - I could have drunk the whole bottle.

Meeting new people and unrevealed the mysteries of a city is much more interesting while backpacking.