I was going to skip the Beaujolais Nouveau this year. I got turned off in 2008 by the high price and low quality. But the price was better this year, and I'm hearing that 2009 is a great year for Beaujolais (i.e., the real Cru Beaujolais we'll be drinking in a year or two). Why not give it a shot? I took the opportunity to perform a wholly unscientific experiment testing two ideas:

1) Supposedly Beaujolais Nouveau is better a couple of weeks after the official release, allowing it to settle down and recover from bottle shock. I have no proof of this, nor did I try it before and after, but I thought it'd be worth it to try the wine after a few weeks rather than guzzling it down 45 minutes after bringing it home.

2) Find a real Beaujolais at the same price and alcohol content and evaluate it against the Nouveau, adding additional credence to the widespread fact that any Beaujolais is better than Nouveau. 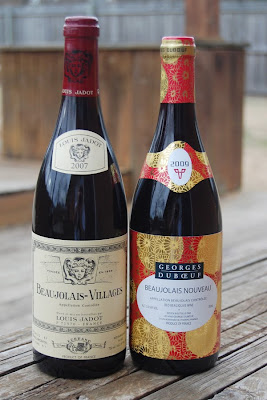 Starting off... the 2009 Georges Dubœuf Beaujolais Nouveau. $13, 12.5% abv. Bananas and strawberries, as usual, though the 2009 is far smoother than the 2008 and has a more pleasant tartness. It tastes better chilled than at room temperature, and after being open and in the fridge for two days, it was even more relaxed. Did the waiting and resting make a difference? I can't say for sure, but with the haste and jostling of the bottles in the runup to Bojo Novo day ever year, it wouldn't hurt to wait a few days at least.

At one point I began thinking that unused Beaujolais Nouveau could make a really delicious red wine vinegar, one of those odd intersections Terry Pratchett described as "where the falling angel meets the rising ape".

A lot of people have said this year's label design looks Chinese, but to my eye it seems more inspired by the Хохлома folk art of Nizhny Novgorod. I'm by no means an art expert or a specialist in Khokhloma, but having looked at a lot of Russian vases, plates, and lacquer boxes from the region I always wondered why they designed everything in red, gold, and black. Just look at examples of the style, particularly the swan at the bottom of this page.

I lucked out and found a Beaujolais at the same price and alcohol content. 2007 Louis Jadot Beaujolais-Villages. $13, 12.5% abv. Much more balanced, with a dominant raspberry profile and an alluring hint of cardamom. The tartness and acidity of the Nouveau is completely gone, with a light red wine that goes down as easily as water. In fact, it's a joy to try a restrained red after so many fruit bombs. This wine tastes better at room temperature; chilled it loses complexity. All in all a much better wine, and I can't stress this enough, AT THE SAME PRICE AS THE NOUVEAU.

The Nouveau is enclosed with a short plastic cork, and the Jadot has a composite Diam cork, which is engineered using granulated natural cork and treated to avoid TCA contamination. I haven't encountered a lot of Diam-branded corks yet, but they provide the look and feel of "real" corks with fewer of the drawbacks. 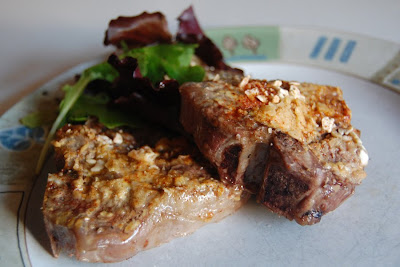 First I invited my brother over for dinner (steaks and baked potatoes) and tried the pair of wines. They performed well, and I took my initial notes, but it really wasn't an ideal pairing. That would have to wait until two days later, when I served the leftover Beaujolais with some delicate lamb chops, coated in Dijon mustard and breadcrumbs and baked/broiled until cooked to medium doneness. Together these three little chops barely topped a half pound, but were perfect in flavor, tenderness, and juiciness. I'll eat any cut of lamb at any time of the day or night, yet I'm pretty sure this is the first time I've had a Gamay-based wine with lamb. It's a good pairing, and while the Nouveau worked well, again, the Beaujolais-Villages came shining through as the superior choice.

I know it's become popular in some circles to bash Beaujolais Nouveau for a variety of reasons from anti-French sentiment to snobbishness to carbon footprint, but I don't think it should be completely avoided. As a fun holiday novelty wine at $10? No problem. But I'd urge any fans stocking up this Christmas season to consider picking up a Nouveau and a Cru or Beaujolais-Villages rather than two bottles of the Nouveau. Try them side by side, see what you think, and I've got a hunch you'll be buying a lot more "real" Beaujolais in 2010.

Every year when I pick up my bottle of Beaujolais...I think of you :-) This year I've had the pleasure of having both of these bottles, and I enjoyed them both.

I can still remember that big smile on your face when I pointed out the banana aroma. Have you tried other Crus, like Morgon and Fleurie and Julienas?

I've always hated Nouveau, that banana thing being one of the biggest reasons but I have to say...the 2009s are a good clip better than the past 5 or 6 vintages. That being said, I would urge people to do just as you have said, try the real deal for either the same price or a few dollars more, so worth it.

Last year's Nouveau was the first time I ever got angry at a wine. Locally it was selling for $17 a bottle, and I felt that it was the kind of bad Quality/Price Ratio that could hurt the image of wine in general.

I'm not trying to be cheap, but even at $13 there's much better options. In a well-stocked wine shop there's probably a few Languedocs under $10 that could easily beat a Nouveau in terms of quality.

Anyone have thoughts on the bottle shock angle? Myth or reality? I suppose I ought to get two bottles, let one rest for a week and subject the other to constant jostling and shaking.

I once performed an accidental experiment regarding the impact of heat and oxygen on a wine. I left a half-empty bottle of Chardonnay in the trunk of my car for a week this summer, when temperatures went above 100. It was decent enough when I first opened it, but after that week of abuse it was so foul (I didn't dare taste it) I poured it down the drain and then had to run hot water and detergent for a while to flush the smell out of the pipes.

Benito,
Not sure about bottle shock, truth be told....I taste them once on the Thursday they arrive and do not return until next year. Would not doubt that letting the wine settle a bit would do it some good.

The Jadot Villages is their best year in 20, actually drinkable, which is highly irregular from these guys.