In January, I wrote about two wines from Robert Oatley in Australia. Recently I got a chance to try two more of his wines, a Sauvignon Blanc and a Sangiovese rosé. As most readers should know by now, I never turn down a dry rosé, and I'm finding Sauvignon Blanc a lot more interesting than Chardonnay in the way that it's made around the world. 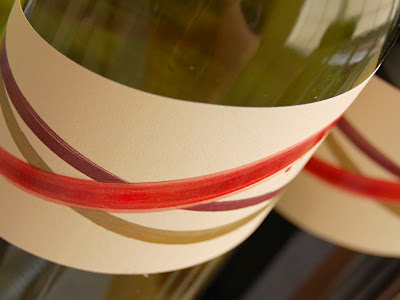 The last time I wrote about these wines, I praised the label because of its elegant design and the obvious difficulties that must have been involved in printing it. Recently I heard from the print shop that produced the labels--a sales manager from Adelaide wrote and confirmed that yes, the labels were a complex project, but they were able to pull it off. Ladies and gentlemen, a round of applause for Collotype. Oh, after three bottles have been opened and the table is getting convivial we might toast the winemaker, but how often do we celebrate the graphic designers, bottle producers, and label printers? Ultimately they are the public face of the entire wine industry, responsible for the final point at which a customer hefts two different bottles and makes a choice.

My "brother from another mother" Paul brought over a pair of pies from Memphis Pizza Cafe, an awesome local place that makes glorious thin crust pizza. We paired the white with the Alternative Pizza (mozzarella and cherry tomatoes) and the rosé with the Supreme (a little bit of everything). Both worked exceptionally well, though these wines are fairly food-friendly and should adapt to a wide range of dishes. 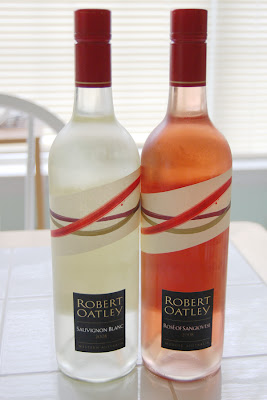 2008 Robert Oatley Sauvignon Blanc from Western Australia. $18, 12.5% abv. Equal parts Pemberton, Frankland and Margaret River (my dear Barbara grew up near the Margaret River wine region). Like a lemon meringue pie--citric, lemony beginning with a soft and creamy finish. Hints of butter somewhere in there, with a touch of orange, and just a little grassy flavor. It's distinct from the full-grapefruit Sauvignon Blancs from New Zealand, more delicate and restrained in character. And you've got to love that lemon sorbet color when the light hits it right.

2008 Robert Oatley Rosé of Sangiovese from the Mudgee region of New South Wales. $18, 13% abv. It's produced using the saignée method, which refers to letting the juice bleed off after limited contact with the skins. I tried this both chilled and at room temperature; it really depends on what you're serving as to what pairs better, but for flavor you get more out of it when it's warm. Initial aroma of overripe strawberries, with an earthy aroma that emerges as the Sangiovese stands up. Without the bold tannins and dark fruit flavors, you get to enjoy a different side of this grape. Beautiful salmon color--I still maintain that pink wines are the most visually fascinating.

There are two thoughts that spring to mind when I'm tasting these wines. The first is, thank God for screwcaps. I seriously hope that the next generation of wine drinkers assumes that all "drink now" wines will be enclosed with screwcaps.

The second thought is the sheer wonder of drinking wine from Australia. Granted, there's loads of it in the American market, and gallons of it have passed my lips. However, I've never lost that feeling of magic that comes from trying a wine from far away. These grapes ripened upon the sunburnt country; by night they rested under the Southern Cross, a constellation I've never seen with my own eyes. But on my tongue I'm savoring the water and flavors of a continent on the other side of the world...
Posted by Benito at 12:20 AM

Hot damn, a wine we have in common! I tasted the Oatley a few weeks ago and instantly thought it had a place amid our stacks of pink wine. Showy and clearly Australian but still quite refreshing. I have to tell you, I spent a good chunk of time checking out the label because of your last post on Oatley.

It is a pretty label, isn't it? My pictures don't do justice to the "wet brush strokes" design.

I tend to go heavy on dry rosé in the summer... I'll be looking for some of your recommendations around here.

Wow- Great post. Love the bit on why you dig wines from a far.

Not sure I've ever had a Sangiovese rose?

Were you able to find the rosé locally? Online sources seem to have run out.

I live in Washington state; guess I'll have to look it up at the Liquor Stores website.