And now for something completely different...

After decades of reading British literature, watching British movies, and even dabbling in the cookery of the scepter'd isle, I only recently learned about jacket potatoes, the English version of a stuffed baked potato and a favorite of cooking-deficient university students in the land of Shakespeare and Churchill. While we Yanks tend to go crazy with the cheese and sour cream and bacon, Brits will throw damned near anything into a baked potato. This list includes, but is not limited to, canned tuna, spaghetti sauce, leftover Indian food, and cole slaw. Next Fourth of July, sit down the kids and explain that weird potato fillings are a great reason to be thankful for the Revolution. 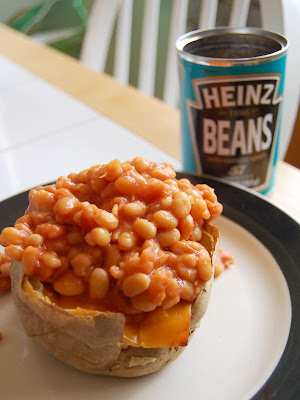 For my first authentic jacket potato, I decided to go with the classic recipe: butter, cheddar cheese, and canned beans. And of course I picked up an imported can of Heinz Baked Beans, which, if you've ever ordered the "English Breakfast" while abroad, you've probably had cold along with eggs and sausage. The can is so iconic and identifiable that you can easily spot expat Englishmen in the store. When you're shopping for groceries, pay attention. If you see more than two cans of these beans in a cart, walk up and say, "Pardon me, but what part of England are you from?" You'll get one of two answers, either 1) "Gorblimey, I'm from Kentworthingstonshire!" or 2) "How did you know my spouse is British?" Bonus points for grabbing the last can off the shelf to see if the stiff upper lip survived the trip across the pond.

My verdict? Surprisingly delicious. Piling starch on top of starch doesn't sound like a good idea, but somehow it works. And it must be noted that I split this among three people as a side dish, though in theory it's a standard budget dinner for one. I would recommend substituting some other brand of baked beans, and enhancing them with mustard, Worcestershire sauce, hot sauce, molasses, etc. The old tinned Heinz beans are serviceable but bland if you've been raised on the savory and sumptuous BBQ beans of the South.
Posted by Benito at 12:01 AM

actually, we pile starch on starch all the time. think about red beans and rice, Hoppin' John (rice and beans), Mexican food that comes with -- ta-dah -- rice and beans, Indian food with lentils and rice.

Looks delicious to me, but the starch on starch is comfort food for this Irish girl, raised in SoCal that spent summers in Mexico...rice, beans and tortillas is a favorite breakfasst food around these parts.

Looking forward to eating my fair share of those beans when I head to London, (for the first time) this fall, but I will hit up the English markets to see if I can find them before the trip because that tater looks delicious!

Totally agreed on the double starch issue, and I love arroz y frijoles and pasta e fagioli and the dozens of Indian dishes--but in those cases, at least you've got smaller pieces, and thus different textures, flavors, sauces and seasonings between the ingredients, etc. A baked potato is the ultimate chunk o' starch, one big pile of polysaccharide goodness. The last thing I normally want on top of it is more starch, much less white navy beans imported from England.

But despite my misgivings, it worked out well. Also, silly trivia: while canned beans in the US are usually sweetened with high fructose corn syrup (I prefer molasses when making from scratch), these UK beans were sweetened with glucose syrup.