I've never really celebrated St. Patrick's Day other than the obligatory wearing of green to avoid getting pinched, but that's more of a good touch/bad touch issue than ethnic pride. Out of respect for the history of brewing I've never touched green beer, out of general self respect I've never dressed as a leprechaun, and because I want to respect myself in the morning I don't go to places like Hjálmar McGillicutty's Norwegian-Irish Chucklehut for loud singing and happy hour half price Irish nachos (made with potato chips instead of tortilla chips). 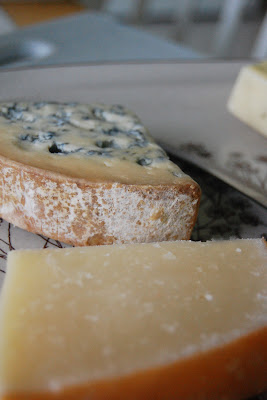 I was in the mood for cooking something different (I'm trying to exercise the culinary muscles these days), and as it had been so long since my last foray into the cuisine of the British Isles, I decided to make an Irish meal for Saturday lunch. I started, of course, with a very Irish appetizer: various American cheeses like hard aged cheddar from Fiscalini in Modesto, California and Bayley Hazen Blue from Jasper Hill Farm in Greensboro, Vermont.

The blue cheese was soft and tangy, but I loved the aged cheddar, with lots of crunchy tyrosine crystals. Rich and nutty and such a wonderful mouthfeel. And I had some naturally bright green Castelvetrano olives from Sicily, because I thought the table did need a little hint of holiday color. These are delicious olives, and are apparently quite trendy these days. A little salty, a little sweet, a little savory, and so cheerfully colored that you'll forget the fact that you used to own a jar of model airplane paint called olive drab. 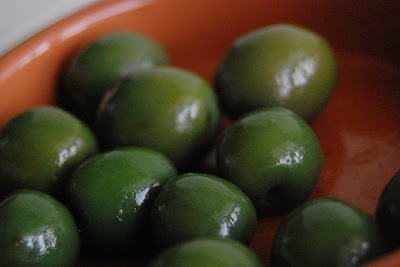 OK, nothing Irish about any of that, but lately I've really been digging a nice round of cheese and olives with a martini before dinner. It is far from an original concept but it's often easy to neglect the classics in a rush to plop down an aluminum tray of frozen grocery store lasagna on the table.

Earlier on Friday night I made a simple lamb stew with a pound of shoulder, bacon, a can of Guinness Draught, some beef stock, onions, and a few other odds and ends. A few hours of braising and then I let it all cool and rest in the refrigerator overnight. In the morning I removed the rendered and solidified pork/lamb fat and slowly reheated the remainder. Fortunately these cuts of shoulder had nice thick marrow pieces, which I made sure to distribute throughout the sauce as it reduced. 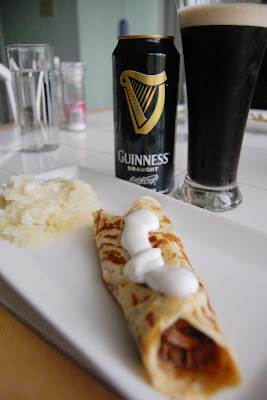 In the morning I made colcannon, a simple dish of potatoes and cabbage. The more complicated part was making boxty, a class of potato pancakes that come in various forms from latkes to crepes. I decided to go the crepe route, stuffed with the stewed lamb and topped with a little sour cream. The boxty took forever to cook. Each pancake took a good 20 minutes, and I started getting annoyed at the whole process. I was successful, but it was much harder than making crepes or fresh tortillas, and the final product wasn't as flexible as any of the various wrapper flatbreads of the world. This is perhaps entirely due to my inexperience with a potato-based flexible wrapper, but frankly I'd prefer lavash or mu shu or blinis or injera over this particular form.

I grated a little green apple into the batter, and despite the difficulty (I only made four pancakes in the 80 minutes of griddle time), the combination of the potatoes, eggs, apple, lamb, and sour cream was really wonderful and filling. Washing it all down with cold and smooth dark beer was fun as well, and I was finally able to relax after hours of cooking and ponder the question of overthinking the peasant fare that I adore. Remember the KISS principle: Keep It Simple, Stupid. It probably would have been a better idea to do the simpler latke-style boxty with a combination of mashed and grated potato, and I still could have topped it with lamb stew and cream and even a decorative garnish of microgreens that looked like tiny shamrocks, but it wouldn't have taken anywhere near as long.

But at the end of the day, I had a great meal, good company, delicious beer, and didn't have to wade through a horde of idiots wearing "KISS ME--I'M IRISH!" buttons. Instead, it was a quiet meal between a Scots Presbyterian (yours truly) and a redheaded Irish Catholic (Julia) that didn't involve warfare, internecine domestic violence, or the mediation of Bill Clinton on the public stage. Rather, I think that the Irish and most folks around the world would prefer a gentle and respectful celebration of their holidays by non-residents, and I hope that I have done so in this post.
Posted by Benito at 12:50 AM

What a wonderful, thoughtful posting. I happened on to your blog via the links provided by Sam without Dosages and I'm so glad that I did. You write and pontificate in such a wonderful conversational style that it feels like being there, although "there", Memphis is apparently farther that I thought: your posting is dated Monday the 19th, while here in Oregon, we are still enjoying the remnants of Sunday the 18th. (Must be the recent time change that has us lagging behind).

It is truly a gift to communicate with such ease and grace and I thank you for making the effort. I meant to comment on your Muscadet posting, having recently lavished in the glory of a decade old bottle that left me shaking my head that something so seemingly simple could be so damn good. And I like your culinary explorations and will definitely endeavor to replicate some facsimile of your successes...but of course will steer well clear of boxty!

Thanks again and cheers.
Winey the Elder

I publish in advance so that posts are always ready Monday-Wednesday-Friday. It's a little old fashioned but keeps me on schedule and it's worked for a few years now. :)

Glad you found the blog and Samantha is a dear friend. Thanks for reading and boxty is fine as long as someone else is making it for you!