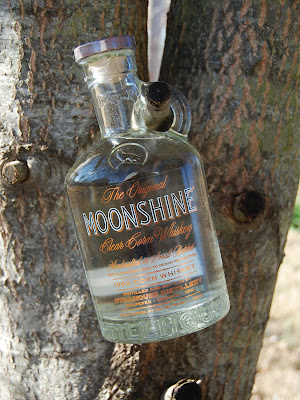 I was offered a sample of moonshine, and coming from Tennessee, I was familiar with the process. I made a phone call to ask about log cabins. "I'm looking to put up a little two room cabin in the backyard. It only needs a small water heater, something that holds about a quart." I gave the man my address, and just like a child who stays up late on Christmas Eve waiting to hear sleigh bells, I was pretty sure I heard the rumble of a souped-up Dodge Charger around two a.m.

During Wolfie's morning constitutional, I was delighted to find a jug of 'shine hanging on the oak tree in the backyard.

Well, that's the way it used to happen. Moonshine is getting a bit more respectable (and legal) these days, and you can walk into a store and purchase it. Now, I do need to clear up a few definitions. Moonshine® is the brand in this case, and this is a Clear Corn Whiskey made by Stillhouse in the Commonwealth of Virginia. Put this product in a barrel for a few years and you've got regular whiskey. Some would argue that this is not technically moonshine because it is a legal product, and there are other debates about having a protected status just like for aquavit or grappa or any number of other regional white spirits. There are several of these products out on the market, either early sales for a new distillery (selling the clear liquor while waiting for the whiskey to age) or providing an option for people to try an authentic American spirit without shady late night deals or having to know the right people who have an adversarial relationship with the IRS and BATF. 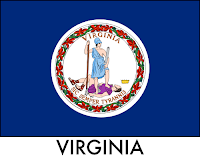 Stillhouse Moonshine Clear Corn Whiskey
$40/750mL, 40% abv.
It's clear with a slightly yellow tinge and has a sweet corn aroma. It's fairly mild on the palate, with a light sweetness. That means that when using for mixing purposes, you're going to want to think rum more than vodka or whiskey. I found that it went very well with citrus flavors (adding balancing bitterness and acidity). Frankly a dash of grapefruit bitters and a splash of sparkling water made for a pretty refreshing cocktail, but you'll be good with a wedge of lime or lemon. Or you can go old school and use the traditional mixer Mountain Dew, now available in a wide variety of flavors.

P.S. This is made in Culpeper, Virginia, a small town of under 10,000. On a Scout trip in 1989 we camped out one night at a miniature golf course in Culpeper. Our Scoutmaster was a master of working out deals for places to sleep for free, which during my run included tennis courts, public parks, parking lots, and many other odd places.

Note: This jug was received as a sample.
Posted by Benito at 12:09 AM