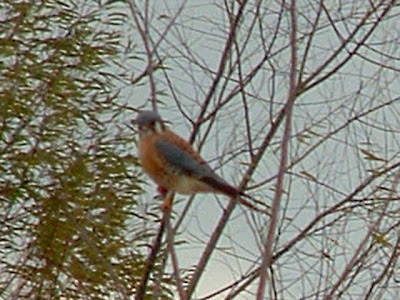 I don't know if I've ever mentioned this on the blog before, but I am fond of spotting wild birds. I don't have a notebook, or a life list, and I've never traveled specifically to see if the rumors of some rare tropical bird being blown into North Texas by a storm are actually true. But if I see a bird that's not part of the everyday flock, I'll quietly sit and watch it as long as I can, jotting down details, and look it up later. Here's an American Kestrel (a tiny hawk of this region) I spotted a while back. The kestrel isn't rare, but one happened to move into my neighborhood in 2003 and I was always glad to see him in a tree, scanning the vacant lots for scurrying mice or flitting dragonflies. 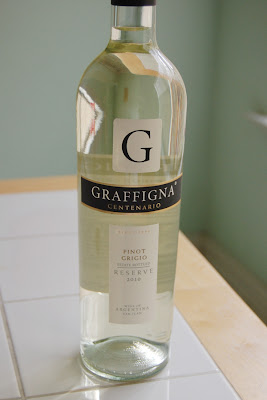 I had sort of a similar reaction when this wine showed up at my house. There's nothing rare about Pinot Grigio, but I really don't expect it from Argentina. Indeed, even being aware of Italian emigration to Argentina didn't dissolve the cognitive dissonance. Even now, with the name and the label, I still think this is an Italian wine.

Oddly chalky, with aromas and flavors of lime peel and cream. There's a good bit of fruit and acidity here, and it's more full-bodied than most of what you see from this grape. The chalky quality isn't a bad thing--it just happens to be the first thing I notice upon tasting, even a day later. I'm happy that it gives it something more distinct and recognizable than the vast, watery PG that's out there on the market.

This wine comes from San Juan, just north of the Mendoza province/wine region. I think almost every Argentine wine I've reviewed has come from Mendoza, so it's nice to try something from the second-most productive wine region. Even then, it's amazing to think that wine has been made there since the first Spanish settlements of the mid-1500s.

My husband and I tried this wine at one of our favorite restaurants upon the recommendation of our waiter. It was a nice accompaniment to the salmon I had, with a subtle but enhancing taste. I liked it so much my husband bought a bottle for me for Valentine's. We recently visited Mendoza and now want to go back and experience San Juan.

Glad you liked the wine, and I've heard that Argentina is beautiful. Hope you get to go back!