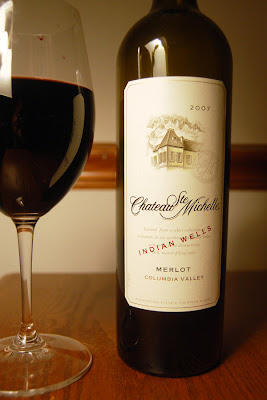 A brief review of a wine that I've felt has been a solid performer over multiple vintages... A while back I chose the 2007 Indian Wells Merlot for an online tasting. $18, 14.5% abv. 80% Merlot, 19% Syrah, 1% Malbec, from the Wahluke Slope of Washington state.

While still a bit young, this has an initial aroma of boysenberry jam. There's a touch of toast there as well, but once the wine breathes and softens, you get elements of green pepper, earth, and it becomes light and mellow. I've always wanted to see how this wine ages, but I've never been able to hold on to one long enough to find out.

The Pacific Northwest is putting out some spectacular wines these days, and the region is justifiably becoming trendy and popular in certain corners. A big producer like Ste. Michelle seems at odds with the small, independent reputation that is associated with the area, but I've always been a fan of their still and sparkling wines.
Posted by Benito at 12:30 AM

they're a big producer, but they definitely bring more value in the price range than a lot of California wines.

Set the table for small producers to succeed as well...

I certainly agree, and they're also widely distributed enough that you can recommend one to a friend or relative in another state and there's a pretty good chance it will be available.

I haven't seen the sort of hostility towards Ste. Michelle that you see directed at Gallo, for instance (and they are much different companies), but once in a while I encounter these rumblings that are reminiscent of the early Seattle grunge bands vs. a big record label.

I am not a drinker but I love to taste different kinds of wines. I am so interested to try that one. I am so sure that it is so good.