There are firsts you remember and firsts that you don't. No need to get too personal here, but when it comes to the various beverages I write about, I honestly don't remember specific details about the first beer/wine/spirit I tried. Part of that has to do with the fact that those events are closing in on 20 years ago, and part of it is that I never envisioned a future in which I'd be I'd be writing about these topics for an international audience. 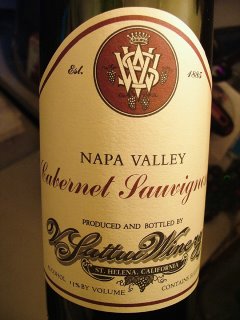 I definitely remember becoming aware of V. Sattui in the early 90s, when I was in high school and eagerly cooking as often as possible. Luckily at the same time, Dad started getting mixed cases of Sattui wines as gifts each year. The household wine consumption at the time was low, but I was permitted to use the odd bottle for cooking purposes. I'd take a sip from the measuring cup occasionally--never enough to feel any effects, just enough to get the flavor and try to gauge what it would do with the food. At the age of thirteen I learned important lessons like "red wine turns risotto a really unappealing shade of purple-gray" and "White Zinfandel makes a weird coq au vin".

When I say sample cases, I'm talking about a really diverse assortment of wines. Chardonnay, Cabernet Sauvignon and Merlot, of course, but also Riesling, Zinfandel, Gewürztraminer, a rosé, and various blends. Of course at the time I was more interested in the sweeter wines, but it was an interesting early exposure to the concept that not all wines smell or taste the same. I know that sounds odd, but in speaking to a lot of people who are new to wine, this is a major hurdle to overcome in wine appreciation. Initially it all just tastes like "wine", maybe "red" or "white" but not much beyond that. In trying to help folks open up to the idea, I'll often try to connect with some hobby or passion of theirs. "All country music sounds the same, right? Every car has four wheels and some doors, what's the difference?"

Two decades later, Dad gave me a pair of Sattui bottles for my birthday. 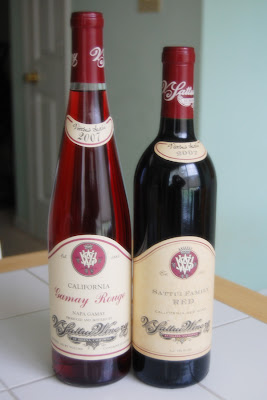 2007 Sattui Family Red. Zinfandel, Cabernet Sauvignon, and Syrah. $16, 14% abv. I don't know what the specific percentages of the grapes are, but the aroma is primarily Zinfandel. Blackberry jam nose, loads of blackberry and raspberry flavors. Firm tannins, brambly finish. I ended up enjoying this one on New Year's eve with a ribeye, sweet potatoes, and green peas. Wonderful way to cap off 2009.

2007 Gamay Rouge. $18, 12% abv. This is an interesting wine, made from Gamay Rouge (Napa Gamay), which now appears to be Valdiguié. I remembered it as a dry rosé since it was much less sweet than the White Zinfandel, but now I recognize it as a medium sweet wine with 1.5% residual sugar. Loads of strawberry and cherry aromas, with a full-fruit flavor boosted by the sugar and a tart, cranberry acidity. Imagine a very young and brash Pinot Noir but sweeter.

Why the confusion on the grape name? From what I can piece together, Valdiguié was imported from its native Languedoc-Roussillon and labeled as the true Gamay of Beaujolais. California producers started calling it Napa Gamay or Gamay Rouge, and after DNA testing in the 90s, the true heritage was sorted out. Traditions die hard, though, and while you can no longer use the name "Napa Gamay" other variants slip through. It's a story that plays out again and again in the wine world.

I had this with a club sandwich and potato salad, and it seems perfect for a picnic. I think it would be great for gatherings like Thanksgiving, because it's sweet enough to appeal to the novices but serious enough to be enjoyed by the more experienced wine drinkers. I think the last time I had this was the summer I was 19. Brings back quite a few memories.
Posted by Benito at 12:20 AM

V. Sattui wins all the medals at the CA State Fair because they make so many different varieties that they can enter every category. But for good, affordable wines that they mainly only sell at the winery, they're tough to best if you're in Napa.

The winery has a great country store to buy a picnic and they encourage stopping on the grounds for a cheap tasting/eating break while you're vineyard-hopping.

Thanks for the flashback to one of my favorite haunts in Wine Country.

I don't pay much attention to medals (long story for another day!), but these wines hold a special place in my heart and I know a lot of people that have had a wonderful time at the winery. My parents visited there a few years back and really enjoyed it.

My friend, as you know I go to Napa a couple of times a year. I never fail to stop in here and get a bottle of Gamay Rouge and a picnic lunch and sit outside and people watch. One of the most fun things to do while in the valley. I still have some 97 susans vineyard cab I bought in the cellar!! Need to have you and Dad over and drink that dude..
Enjoyed the read as always my friend

I recall, before my first trip to Napa, my wine-loving uncle telling us to visit Sattui. I was shocked when I went in there- every other winery only had Cab, Merlot, Chardonnay, and Sauvignon Blanc. Here was Gewurz, Riesling, Zinfandel, all these possibilities. Generally, I'd think the quality would suffer spreading the winemaker so thin, but they do a pretty solid job (although I feel some of the reds are a little too extracted).

We were in the wine club for a couple years, so I still have a backlog of bottles. Single vineyard cabs need some time yet.

As I've sat back and thought about the Sattui wines over the last couple of days, I think the first ones I saw were the '88 or '89 vintages. I remember some of the mid-90s Cabs and Zins performing well ten years later.

It's an interesting selection, and while it doesn't seem like that big a deal nowadays, at the time it was a fascinating variety. I also remember saying to a friend around the time described above, "Hey, did you know there's such a thing as Red Zinfandel?"

Thanks for sharing the 2007 Sattui Family Red wine review. I have never tasted it but sounds tempting. Will put this bottle to test this weekend.

I can tell you the exact moment I first tasted red wine. It was love at first sip.

BTW, red wine ain't too great for omelettes, neither. Same shade of gray.

Have you written about that magical first sip?

And yeah, it's kind of funny cooking with red wine--in a beef stew or tomato sauce it's great. But it can make things like potatoes look downright repulsive.