I like turkey, but I've always felt Thanksgiving was a big enough feast to incorporate alternate proteins. Personally I've always wanted some seafood, but it gets difficult to do this with an oven full of casseroles and a stovetop full of gravy, mulled cider, and other odds and ends. When I was a kid our standard family gathering always included a spiral-sliced ham with a brown sugar coating. For the past couple of years, as I've been helping my friend Paul out with his big family gathering, I've been trying a few different things. Last year it was pork loin and leg of lamb. With a smaller crowd this year, I decided to stick to one meat, and found a lovely and affordable rack of pork (also known as a pork rib roast). 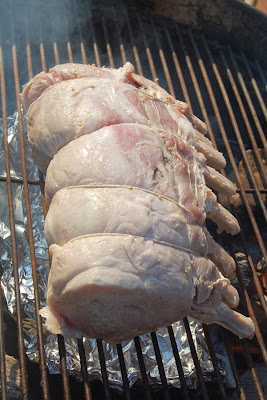 This is the same cut as a rack of lamb, or a beef bone-in ribeye roast, just from the pig instead. But since modern pork isn't as tender as lamb nor as laced with intramuscular fat as beef, I always brine it. Pictured at right is the five pound roast after 12 hours of brining. I don't have exact measurements, but there are thousands of brining guides out there. (If you'd like a good starting point, try something like this.)

I usually just eyeball it and focus more on flavor than precise proportions. My brine included unfiltered apple cider, water, kosher salt, mustard seeds, peppercorns, and star anise. I brought it all to a boil, let it cool, poured it over the pork, and turned it every few hours. After about twelve hours I rinsed and dried the roast and let it rest for a couple of hours before smoking. 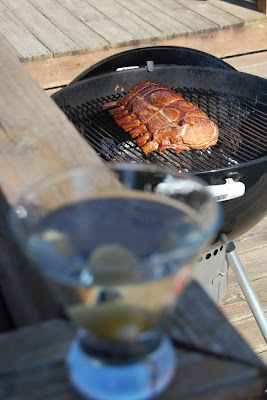 For the fire, I placed a tray of aluminum foil under the center of the grill and banked lump charcoal on either side (started in a chimney, of course). I threw chunks of raw mesquite on top of the hot coals, covered it, and sat back for an hour and a half.

Around the time to add more coals and mesquite, Alaina graciously made me a martini with a huge garlic-stuffed olive. I had my laptop with me out on the porch, and discovered a higher plane of BBQ nirvana.

As you can see, I trussed up the roast with some cotton kitchen twine. It's not mandatory, but for this particular cut (from whatever animal), I find that the twine helps keep it in a rounder shape, keeps the center from getting overcooked, and frankly, it's just fun to tie up your dinner. 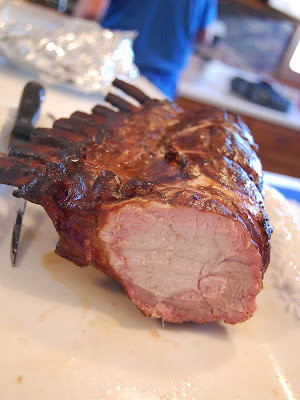 Here's the finished product, after three hours of smoking and twenty minutes of resting. I sliced off part of the end for the photo and was immediately surrounded by Thanksgiving guests lured by the aroma of pork. You can see the nice pink smoke ring around the edge, just about perfect at ¼" depth. For a sauce I had made a batch of fresh cranberry sauce, ditching part of the sugar and water and adding the juice and zest of one orange, walnuts, blackcurrant preserves, and a dash of brandy.

What's nice about this roast is that you can serve it a number of ways. You can cut off thick or thin pork chops, you can just carve thin slices of meat, or you can pull off the bones in case anyone's in the mood for very meaty ribs. 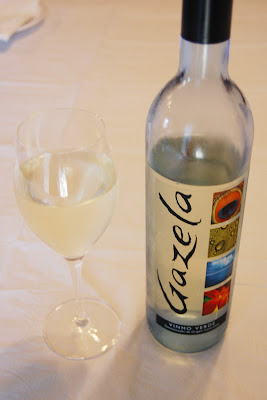 I'm not doing justice to the wide range of awesome food that was there. Paul fixed the turkey in the style of America's Test Kitchen, with plenty of lemons, rosemary, and butter. There were casseroles galore (frankly my favorite part of the holiday), and gigantic Sister Schubert's rolls. I was too busy eating at that point to snap pictures of everything. I did want to highlight two odd wines that I brought along, which were pretty well received by the crowd. I was going for bottles that were lightly sweet, barely fizzy, and very low in alcohol, i.e. perfect for people that don't drink wine on a regular basis.

The first was the Gazela Vinho Verde. Around $8, 9% abv. This "green wine" from Portugal is fun and light, but it had been sitting in the cellar since the summer and I just never got around to it. Crisp and slightly tart with a hint of sweetness, this is the closest thing to a fizzy lemonade you'll find in the wine world. Like many Portuguese wines, it's made from multiple grapes with names that are mostly unrecognizable to us: Loureiro, Arinto, Trajadura, Avesso and Azal. While I don't often drink this wine, I do think that it's one of the most perfect appetizer wines available, and the low price means it never hurts to keep a bottle on hand. 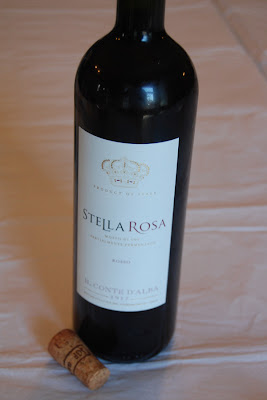 Second was the 1917 Stella Rosa Il Conte d'Alba from the Piedmont region of Italy. Contrary to the date, this is a non-vintage wine probably made last year. Around $10, 5.5% abv. It's a light, barely red, slightly fizzy wine that's just a bit sweet. While many people think of it as a dessert wine, I think something more robust like Brachetto d'Acqui works better there. This is more of a summer picnic wine, and I picked it out for its refreshing qualities. With such a low alcohol content, this falls into a specific EU wine category called "Partially Fermented Grape Must", which is perhaps one of the most unappealing phrases you can put on a label. This is sort of like an elegant grape soda with the strength of beer, but it's pretty tasty.

If there's one thing this wine is good for, it's helping someone make the mental leap from only drinking white wines to trying reds. Give the Stella Rosa a shot, then move up to Beaujolais, then Pinot Noir, etc. Eventually your target will be swilling pure unaged Cabernet Franc and demanding more tannins.

There were other, more distinguished wines, but more on those later...
Posted by Benito at 12:24 AM

LOL We call Stella Rosa crack at our shop, if and when we run out I swear people act like they might die! Dinner looks amazing Ben, that pork looks perfect.

I'm not going to lie, I bought the Stella Rosa by accident. As in, I got distracted talking to the wine shop owner and didn't grab the Chianti I was reaching for. I didn't discover what I bought until months later.

But it was a big hit, made a lot of people happy, and I figure the market is broad enough to handle a reddish version of Moscato d'Asti (my go-to date wine until I was 25).

Thanks for the compliments on the pork, it was delicious. The South may get kicked around for a lot of reasons, but by God, we know how to handle smoke and pig.

the pork seems to have a decent amount of marbling, and the brine surely helped, but did slow smoking a relatively lean piece of meat (as opposed to, say, a shoulder) dry it out at all? If not, I will have to try it immediately!

I did pork for Thanksgiving brunch too! Great minds think alike. That rack looks absolutely delicious.

Benito,
There is a HUGE market for wines like that, like I said...when we run out people wig out. We had 10 cases 2 days before Thanksgiving, we were sold out the day after.

It was a bit dry, but probably needed a little less time on the smoker. I was trying to time it to be ready with the start of the meal.

Most folks had thin slices, and with the turkey gravy or cranberry sauce moistness wasn't an issue.

It would be interesting to see a wine blog based on what's actually popular by sales volume rather than what's appealing to the wine fanatic. I once got a look at some sales figures for what could charitably be called "hobo wines" and it blew my mind.