Apocalypse Cow and the Sloppy Buffaloes

When I received a bottle of Apocalypse Cow beer from dear friend Tom R., I immediately thought of a funny quote from the short-lived The Tick live action series. A character named Batmanuel said with a deadpan Spanish accent, "Apocalypse Cow is fifty feet tall; she shoots fire from her teats."

If you're not familiar with the weird humor of Ben Edlund's nigh-invulnerable superhero*, just ignore the above. Let's talk about the beer. Spoooon! 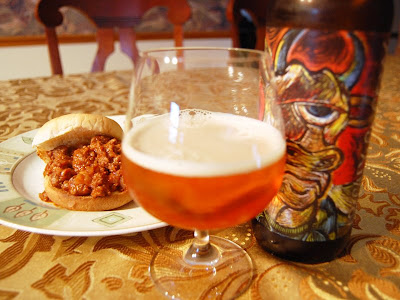 Brewed in Munster, Indiana by Three Floyds Brewing Co., at 22 oz. and 10% abv, this is nearly equivalent to an entire bottle of wine. But show me a wine that has a rating of 100 IBUs, eh? Those used to superlight lagers need not apply; I think my beard grew a half inch while drinking this. Lovely orange color, with a firm orange peel nose. Other spice flavors develop on the palate, like nutmeg and allspice. This style of beer provides huge bitter flavors, and this particular bottle did not disappoint. Long finish on the flavor. I'm also a bit partial to the weird, cyclopean bovine on the label.

After seeing the recipe in Cook's Illustrated, I decided to make a batch of sloppy joes, despite not having a craving for them in over two decades. I can't remember the last time I had these--Scout camp or a school cafeteria. It's the kind of dish that screams "institutional", but the article seemed like a good guys' night/beer tasting companion dish. I was also curious to try one fresh, as I don't think I'd ever eaten one that had spent less than three hours in a steam tray. I made a few substitutions in the interest of flavor. I used ground buffalo instead of beef, a big shallot instead of an onion, and splashed in a bit of Bourbon with the brown sugar.

The "sloppy buffaloes" were quite good, surprisingly tasty for something generally associated with the worst of 50s American cooking. I can't imagine that we'll start seeing gourmet variations in trendy bars like what's happening with sliders, but you never know. If a Basque-fusion chef comes out with a chorizo/merguez/yellow tomato Sloppy Joseba served on split brioche, drop me a line.


*Sample words of wisdom from the animated series: "You know, though today was the worst day of my life, I learned many things. First, the world looks a lot different when you're six inches tall and covered with feathers. Second, two heads are definitely not better than one. And finally, you can lay eggs and still feel like a man."
Posted by Benito at 12:29 AM

The Walken Room does tend to inspire "institutional". ;-)

It would be appropriate. Heck, the guy would probably enjoy a sloppy joe every now and then. It would go well with his robots and TaB® diet soda.

Glad you liked it!! Three Floyds is a great brewery, and I'll try to send more of their stuff your way as occasion permits. They do lots of special brews in the bomber size. Nearly all of them are very good to excellent.

Had another bottle of Furmint lined up to send home with Dave for your upcoming dinner party, but Dave forgot it. Do remind him of his forgetfulness! Repeatedly, perhaps. But he did remember to take home some Three Floyds Dark Lord, so you have that to look forward to!

By the way, the Sloppy Buffaloes look fantastic!

Hey, Sloppy Joes were a staple in my house when I was a kid! Yer makin' me all nostalgic here! I'll have to see if LL would eat a Sloppy Joe for dinner tonight!

If you drop by the brewery soon or know somebody there, pass along my compliments. Their website seemed to lack a contact e-mail. That Dark Lord beer looks awesome, and I'm looking forward to trying it.

If you try the sloppy joes, let me know how they turn out. Fortunately the recipe just makes 4 sandwiches, so you're not going to be stuck with leftovers for a week.

A great thing about Cooks Illustrated is that they frequently cover foods that everyone likes, but few people know how to prepare properly. The piece on cheese lasagna was brilliant, with informative photos of the too runny/too solid extremes that often occur.

Believe it or not my kids do not like Sloppy Joes. Is that crazy or what? What kid doesn't like a Sloppy Joe?

It's been nearly ten years since that episode of The Tick, but that quote will still make me giggle like a five year old. I guess it's a guy thing.