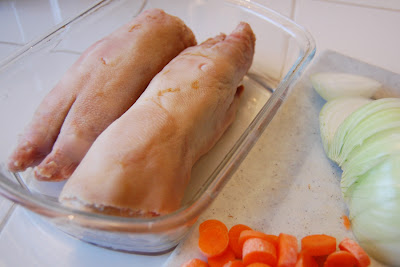 When my friendly neighborhood grocery store offers a new vegetable, critter, or cut of meat, I'm impelled to pick it up. While smoked ham hocks (the ankles of pigs) are widely available here in the South, you don't see raw pig's feet that often. Pickled yes, smoked occasionally, but raw, no. I know they're a French delicacy and prized in many parts of the world, so for the sum of $1.94 I came home with a pair of trotters.

I found a recipe for the signature dish from Montréal's Au Pied de Cochon, a restaurant specializing in traditional Québécois fare. While the pig's feet I found didn't include as much of the shank as I'd like, I did have organic Canadian maple syrup in the cabinet.

One warning for the squeamish (assuming that any have made it this far): the feet arrive clean and shaved, but you still have to rinse them and check for any hairs missed by the razor. This process feels like shaking hands with a corpse that's been pulled out of a cold river. I've got no problem taking apart pigs (I helped dissect 30 in one day as a high school lab assistant), but this might be off-putting for some. 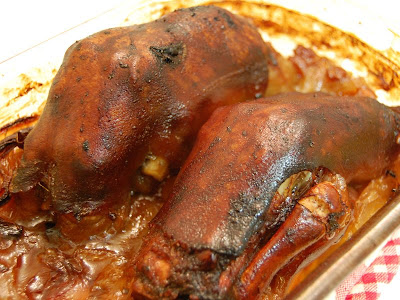 Four hours of brining and four hours of roasting produced the mahogany treasures you see to the right. The house smelled amazing: imagine a cross between bacon and ham wafting all afternoon. My dogs were going crazy at the aroma. And the flavor is great as well, with the crispy skin on the top, the sweet and tender skin on the bottom, meat that's as soft as butter, and plenty of cartilage if you're into that. It's mostly full of bones (phalanges and metacarpals/metatarsals depending on whether they come from the back or front), so your final payoff isn't great. But if you've never tried a properly braised hoof, I'd highly recommend it.
Posted by Benito at 12:20 AM

No wine with this one--the feet weren't done cooking until late in the evening, and I'd already had a light supper. I don't know what wine would match well; Belgian beer or hard cider seems more appropriate.

Prior to cooking the stuff on the plate looks a little like something the detectives in a pulp thriller may have found in the box after the pyscho got spooked and fled the premises.

As any doctor or butcher will tell you, if you want to learn human anatomy the pig is a pretty good place to start. Back at my high school there's a jar of Formalin with a perfectly extracted fetal pig brain in it. It's labeled "Ben's Brain" in honor of me, the extractor. I also performed a removal of the entire spinal column of a fetal pig, but it didn't survive the preservation process.

During this period of my education, meals at the family dinner table got a little awkward. I'd start taking apart a lobster and say to the rest of the family, "Look! Here's the cerebral ganglion!"