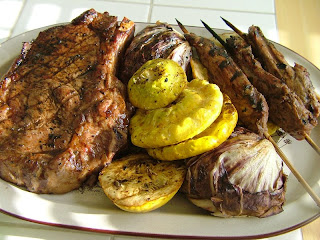 This summer I haven't spent as much time grilling as I would have liked. Part of that has to do with being out of town a lot and part of it has to do with the blistering temperatures of July. But I fired up the Weber on a recent Sunday and life was good.

There's a bone-in ribeye, sliced pattypan squash, radicchio, and lamb tenderloins on skewers. Everything was marinated in its own separate mixture prior to grilling, with the tenderloins getting the buttermilk treatment. I threw it all on a platter and brought it inside for everyone to dig in as desired. 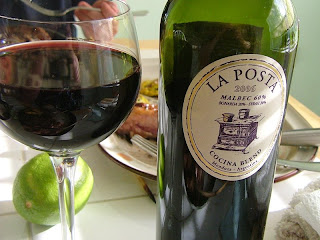 These were the first lamb tenderloins I'd fixed, and while definitely tender and boneless, they cook very quickly and lack the depth of flavor you get from a rack, a leg, or chops.

For the wine we popped open a bottle of the 2006 La Posta Cocina Blend from Mendoza in Argentina. $15, 13.5% abv. 60% Malbec, 20% Bonarda, and 20% Syrah. An incredibly smooth red wine made from a curious blend of grapes. It's refreshing to find a young wine that's this mild--just a trace of tannins. Aromas of spice and a touch of plum with light cherry cola flavors and a short finish. 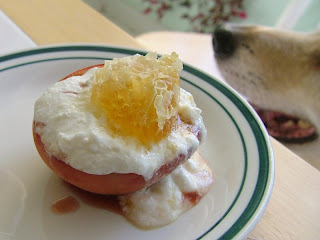 I'm not much of a dessert person, but when the mood strikes this is the kind of thing I like. I halved some Jones Orchard peaches and roasted them in the oven with a little white wine in the baking dish. I topped the peaches with brown sugar and a pinch of sea salt. Then a dollop of ricotta and a chunk of fresh honeycomb from the Farmers Market. From behind the camera, I'm telling Wolfgang that there's nothing on the plate he needs to eat. This dessert was a nice combination of sweet and savory, and the honeycomb was an unexpected treat for my fellow diners.
Posted by Benito at 12:38 AM