"Seven Concannon Wines" sounds like an old Irish folk song. My grandmother has dabbled in this music on the hammered dulcimer and a few other traditional instruments. When I first encountered Concannon in the form of a Petite Sirah at a tasting, I was struck by the Irish name. Despite the long Catholic history of the island, the massive imports of wine from France during eras when England was sticking to Ports and Sherries from Spain, and a small indigenous industry, you just don't normally see Irish names associated with wine. But Concannon was founded by an Irish immigrant in the Livermore Valley back in 1883 and the family tradition continues today.

I'm not entirely Irish--my family comes from throughout the British Isles--but with the red beard and freckles and a tendency to sunburn anywhere outside of Seattle, I've got plenty of the blood of Éire running through my veins. When I was in Boston everyone thought I was a local. I don't get obnoxious during St. Patrick's Day (I'm a Protestant, which would complicate matters), but during that high school "wanting an identity" phase I got pretty heavy into the Scots-Irish part of the family tree. Songs were sung, kilts were worn, but I learned a lot of interesting history and developed a general wariness toward England. 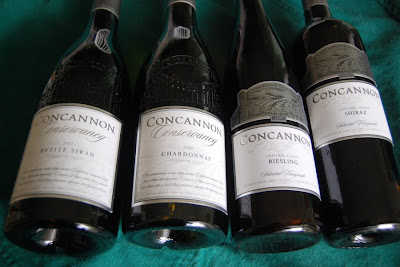 Without further blathering and perhaps a teary rendition of "Danny Boy", I present a slate of Concannon wines that I've tried over the past few months:

2008 Concannon Conservancy Chardonnay
Livermore Valley
$15, 13.5% abv.
Apricot nose with a touch of butter and vanilla. A good example of California Chardonnay, and something that needs to be paired up with a strongly flavored poultry dish.

2007 Concannon Conservancy Petite Sirah
Livermore Valley
$15, 13.5% abv.
Dominant aromas of cassis and blackberry. Medium tannins, restrained fruit. Always one of my favorite bargain Petite Sirahs, and I'm glad to revisit it from time to time. Open this up some afternoon with leftover roast beef and horseradish sauce and enjoy a perfect wine/sandwich combination.

2009 Concannon Selected Vineyards Riesling
Central Coast
$10, 13.5% abv.
Light and crisp with a hint of lemony acidity. West coast Riesling can show up in a lot of different styles, but this is one that would be great with simple summer salads like the classic strawberry and spinach.

2007 Concannon Selected Vineyards Shiraz
Central Coast
$10, 13.5% abv.
This one isn't listed on the company website, and past reviews show both the Syrah and Shiraz spelling on labels along with mixed reviews. The sample I received was not the best example of Syrah I've tasted, and was too heavy on the tart side. 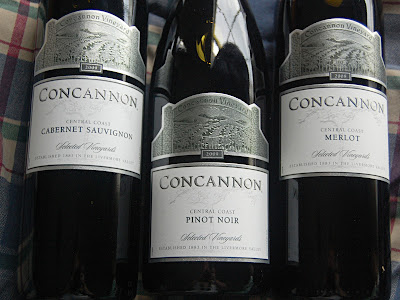 2009 Concannon Selected Vineyards Pinot Noir
Central Coast
$10, 13.5% abv.
Initially tart and strong, but it quickly softens in the glass. Boysenberry and a touch of bacon fat, a little bitter tannic finish, and a lighter red appearance. A basic introductory Pinot Noir, and not a bad deal for the price.

2009 Concannon Selected Vineyards Cabernet Sauvignon
Central Coast
$10, 13.5% abv.
Bright raspberry aroma, touch of seeds, firm tannins and a long cherry finish. Man, I love that raspberry seed flavor in wine when it's just right. Not going to give a food pairing here, just saying this one should be enjoyed on its own for a nightcap.

2008 Concannon Selected Vineyards Merlot
Central Coast
$10, 13.5% abv.
Green bell peppers, tobacco, tart red cherry flavors. Mild tannins, a round body, and a short finish, where a little chocolate shows up. Halfway between Bordeaux and California. Excellent structure for such an inexpensive wine, and recommended for grilled steak or lamb.


Note: These wines were received as samples.
Posted by Benito at 12:41 AM

These should be pretty easy to find around town if you're interested, or ever need an Irish-themed gift that doesn't involve leprechauns. I think Mom would like the Riesling and you'd love the Merlot.

Hey, yes! I was the wine go-to in a goodish-sized wine store in Indiana and Concannon was always a really good value. I admit to never having recommended any white of theirs, but the petit sirah and cab are NICE.

Agreed, and the Petite Sirah is one of those like Bogle that's easy to recommend because you can generally find it all over the United States.

I'm gonna let the Irish stick to my lovely black beer and my "uisce beatha".

There's a surprisingly big Irish influence in Bordeaux, of all places. The legend of the Winegeese.