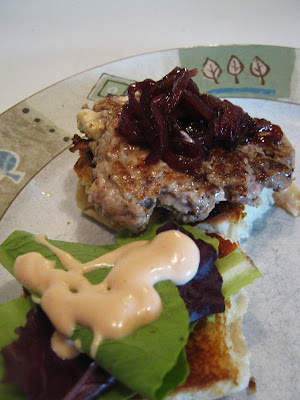 After the success of the Achewood Flavor Burger, the old grey matter churned for a while and I thought about a gourmet version using some different ingredients, but the same general proportions and techniques. I wanted to draw upon the European tradition of combining different meats for sausage and patés and other things. While they may not have thrown on a bunch of ketchup and called it the McGoat Royale, there's a lot of creative mixes that long predate the Americanized hamburger.

In honor of Napoleon and the sheep, I christened this...

Combine all ingredients in a bowl until just incorporated. Split into 8 balls and reserve until the griddle or pan is hot. A nonstick pan will work well here, but there's another method (see below). Smash the meatballs on the hot pan and cook for about three minutes on each side.

I chose to use dinner rolls that were toasted with butter, mesclun greens, remoulade, and my beloved red onion marmalade. The combination was an instant hit, and afterwards resulted in a thousand yard stare of sheer contentment. Paul, hungry for seconds, decided to fry a couple in lard in a cast iron skillet. Thicker, juicer, and certainly easier to get out of the pan.

*Note on Cavender's: I had this for the first time sometime in the 80s, and it was just a general all-purpose seasoning in the house for a while. There's a mix of salt, herbs and spices, MSG, and some other magic that's all ground into a fine powder. It's not like putting a delicate chiffonade of basil on top of something, but there are times when you just want to toss a little flavor on something that's hitting a hot skillet. Visit Tie Dye Travels for a tour of the factory in Arkansas. 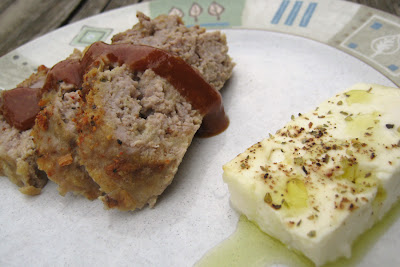 Finding myself with assorted leftovers, I decided to recombine them in a different manner. Here I made a free-form meatloaf (i.e., sitting on a sheet pan in a mound rather than in a pan) of half lamb and half pork, bound with an egg, some breadcrumbs, and Weber's hamburger spice, along with a few other odds and ends. Roast at 175°C/350°F until done, and allow to rest before slicing. I made a quick sauce out of tomato sauce, Dijon mustard, and brown sugar--a proto BBQ sauce. On the side, slices of broiled feta cheese topped with a little oregano and then drizzled with olive oil. Same ingredients, but different mouthfeel and dining experience. There are some amazing gourmet meatloaf recipes out there, incorporating things like dried mushrooms and chunks of salt pork. Don't let it get as complicated as a terrine, but have fun. I think you'll enjoy it.
Posted by Benito at 12:58 AM

It was an opportunity to try a bunch of odds and ends from half-empty bottles rattling around in the fridge. Some Rioja, some California red blends, something from Washington State. Frankly anything red worked pretty well.