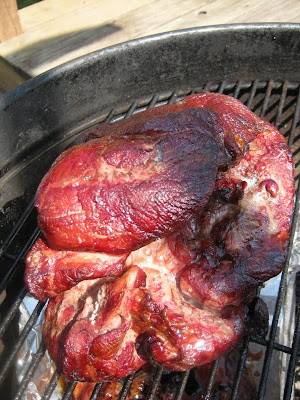 The terms "grilling" and "barbecue" get bandied about a lot with much argument over the terms. Some people assume that anytime you're cooking outdoors, it's a BBQ. I'm not pedantic about the issue, but in general, grilling means you're cooking food directly over a fire, and barbecue means that the food is cooked indirectly and flavored with smoke.

And oh, what a difference wood makes. I love smoking meat with fruit woods. Apple is easy to find and delivers a subtle flavor to chicken, but in this case I used cherry with a four pound pork shoulder. For various applications in the past I've used alder, oak, hickory, and some other odds and ends. Mesquite is great for the quick cooking, but tends to get bitter and nasty for the long haul. If you use pine or scraps of industrial lumber from building sites, please close this window and don't darken my virtual doorstep again. In this case, I smoked the pork shoulder with cherry for four hours, and then let it continue to soften in a warm oven for an additional hour and a half.

Cherry gives a beautiful red color, but there's also a slight sweetness and fruity depth that you don't get from the usual hickory smoked pork. After a half hour of resting, I shredded up part of it for use in pulled pork sandwiches. 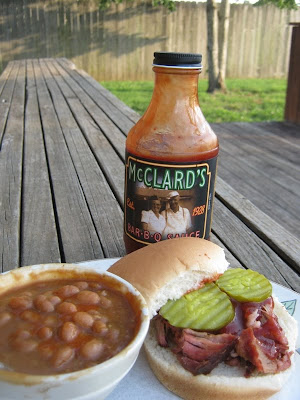 Now, any Memphis boy that's grown up around barbecue culture and assisted at the World Championship down at Memphis in May should make his own sauce. And I've made BBQ sauce from scratch before, but sometimes it's just easier to buy some pre-made. In this case, I tried one I'd never seen before: McClard's BBQ Sauce from Hot Springs, Arkansas. It looked interesting, wasn't expensive, and was the only one on the shelf at Kroger that didn't include high fructose corn syrup. I'm not militant about HFCS, but it's also worth noting that this had the shortest list of ingredients: tomato puree, vinegar, sugar, lemon juice concentrate, salt, onion, pepper, xanthan gum, caramel color.

It's definitely spicy but not hot, and chunks of onion are present in the sauce. It's thinner than Memphis-style sauces (which are about the consistency of ketchup). It's got a great mouth presence because of the high acidity, which balances out the sweetness nicely. I'm impressed and it represents a good balance between the thick sweet sauces of Memphis and the thin vinegar sauces of some other regions. Check it out if you get a chance.
Posted by Benito at 12:24 AM

I'm sorry, but are those PICKLES on your pulled pork barbecue sandwich???? Boy, you have betrayed your Memphis heritage.... slaw and sauce. nudding else.

Thanks for the info on the sauce.

I find that pickles work better with a more vinegar-based sauce, and cole slaw works better with the thick sweet sauces. Nice to change it up once in a while, though I guess I could have added raw onions and made it more like a McRib. ;)

I got it at Kroger at Poplar/Kirby, but it should be available around town. It's worth checking out.

Pulled pork, in my house, always comes with pickles. Looks amazing Benito and um, I might be out in Memphis around October should you wish to try it again. Just sayin'

Will definitely keep that in mind. Pork like this should go particularly well with a hearty red from Slovenia or Serbia. :)