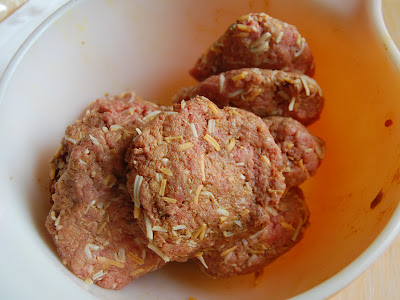 This recipe comes from Chris Onstad's The Achewood Cookbook, a companion piece to his webcomic Achewood which is about a series of cats and stuffed animals having weird adventures in the suburbs. It's not meant for children, as the comic strip involves Adult Language, Adult Situations, Violence, Brief Nudity, and other things warned about during the openings to R-rated movies on cable. This particular recipe is attributed to the stuffed bear Téodor, who... Well, I don't feel like explaining the whole thing. Normally I'd link to somewhere to buy the cookbook or see a preview, but it's out of print, the artist has stopped doing the strip, and his online store is now offline and not expected to return.

Onstad enjoys cooking and loves to experiment in the kitchen with gourmet food and in the bar with inventions like the Neapolitan Cocktail. These culinary notes were slipped into the strip in various ways, though he'd sometimes poke fun at his hobby like when the character Ray suggested pairing a Fennel Ale with a Cilantro-Ape Ceviche.

I've adjusted this recipe (the burgers, not ape ceviche) to work with a half kilo or pound of ground beef, which will produce eight small burgers. The original is just for making a single 3 oz. burger, which is hardly enough to hold heart and soul together. 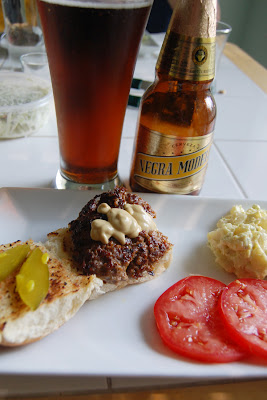 Combine ingredients completely but without overworking the meat. Divide into eight small patties and set up a hot pan (I used a griddle). Drop the patties on the cooking surface and smash down with a spatula. Cook for three minutes, turn, and cook for another two. They will be thin, well-caramelized, and a little loose. But unlike some of the smashed burgers you get in diners, these are incredibly juicy from the cheese and bursting with savory flavor from the mustard and Worcestershire sauce. Serve on toasted buns. Onstad recommends a full set of toppings, but I added just dill pickles and some Dijon mustard. Let the burger deliver most of the flavor here and let those juices seep into the bun.

(Full details of the standard Midwestern smash technique via The Paupered Chef if you're a burger aficionado. My own experience is that this method works best with small burgers, and they need to be served right away. I've had versions that were awful because of overcooking and lack of seasoning.)

Negra Modelo ($8/6-pack, 5.4% abv.) is probably my favorite Mexican beer, and it's a traditional south-of-the-border style called... Munich Dunkel Lager. In the 19th century, a lot of Czechs and Germans moved into Texas and Mexico (and Mexican-owned Tejas and the Republic of Texas and Confederate Texas) and brought their beer recipes with them. Major brands from such immigrants of the period include the popular Dos Equis and Bohemia, not to mention my beloved Shiner.

I tend to pick Negra Modelo out of a general favoritism for darker beers, but also because I think it stands up well to the hearty flavors of mole sauces and roasted goat and other good stuff. Your mileage with a Taco Bell chicken taco may vary. It's lightly sweet from all the dark malts involved, and has a deep, rich, and almost chocolate flavor (again, there's that mole connection). And importantly, it goes pretty damn well with a slider like this.
Posted by Benito at 12:31 AM

While tasting these with brother man Paul, I had to exclaim, "This is a tasty burger!"

Look great. And good call on the Negra Modelo.