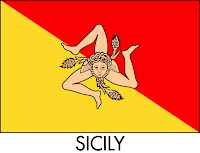 Island wines have always fascinated me. Tasmania and New Zealand come to mind, and then there's limited production in places like Hawaii and Cuba. Madeira from Madeira. Long Island and Martha's Vineyard? Too close to the mainland to count. If you really want island wines, there's one place to go: the Mediterranean. Not only are there lots of options, but the sea has ben the site of flourishing wine production and trade for thousands of years. Corsica, Sardinia, Mallorca, Minorca, Malta, Cyprus, the Aegean and Ionian islands of Greece, and of course, the biggest island of them all: Sicily.

Sicily is currently producing a lot of better-known grapes from Europe like Cabernet Sauvignon and Chardonnay, but for the real island character and terroir I prefer the tried and true grapes that are grown primarily on the triangular island, like Nero d'Avola, Grillo, and others. Many of the white ones have been used to make the fortified wine Marsala for centuries. You may not recognize a grape called Catarratto, but if you've ever sipped Marsala or had a dish made with the wine, you've consumed it. Regular wine production was mostly for short-lived, local consumption, but more and better Sicilian wine is making its way across the world. 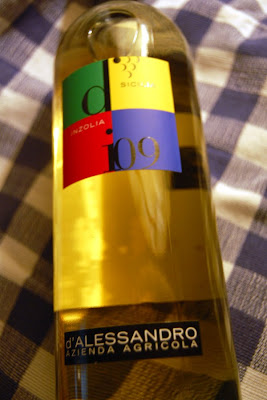 2009 d'Alessandro Inzolia
Sicily
100% Inzolia
$15, 12% abv.
As soon as you open this you know that you're not dealing with your run of the mill white. It has a dark and yeasty aroma, very earthy, with medium acidity, light white peach flavor with a strong citric finish. I'd serve this with strongly flavored poultry or even veal with a darker sauce, though most island wines are natural mates for all sorts of seafood. To go a little crazy, I once had skate wings in a brown butter sauce, and looking back on it this would have been a fun companion.

The Inzolia grape most likely came from Tuscany, where it's known as Ansonica. Even in Sicily, it is also spelled Insolia, or called by a number of other names. Part of the weirdness of tracking down obscure grapes is that you'll get to try something with an odd name like Weißer Clevner and when you go to do to the research you find out that's it's just regular old Chardonnay.