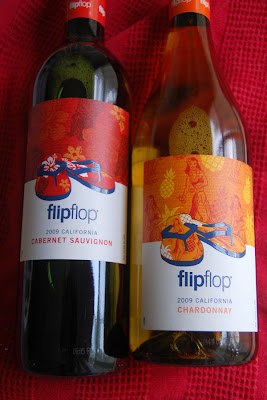 flipflop wines is based out of California with a range of seven popular grapes. In addition to the Cab Sav and Chard below, they also offer a Moscato, Merlot, Pinot Noir, Pinot Grigio, and Riesling. The packaging and the marketing reminds me a bit of Twin Fins from a few years ago, but it turns out that there's some more going on with this brand. But first, let's take a sip from the convenient screwcap bottles:

2009 flipflop Cabernet Sauvignon
California
$7, 13.5% abv.
A little strawberry jam with a black cherry aftertaste. Big fruit flavors, a bit of acidity, and firm tannins. Somewhat smoother after at least an hour of breathing. This is a fun one to throw in the cooler for a BBQ. Sometimes you want a red wine ice cold, and it can be a good way to introduce people who might otherwise fear big tannins.

2009 flipflop Chardonnay
California
$7, 13.5% abv.
Musky aroma with hints of peaches and jasmine underneath. Darker flavor with a touch of sweetness and a little acidity. Bit of oaky vanilla. Again, I'm going to recommend serving this one cold with a BBQ, though this will be a good match for grilled chicken and vegetables, or if you're working your mojo and doing some flame-kissed quesadillas on the side.

Now, I've personally never worn flip flops. Frankly if it were up to me, I'd go barefoot all the time, though I've found snow starts to get a little uncomfortable after fifteen minutes or so. But lots of people don't go shoeless by choice and have to walk through environments much harsher than the American suburbs. Which is why this winery has partnered with a charity that provides shoes to people in developing nations, and is donating a pair of flip flops for every bottle purchased. From the press release:

Soles4Souls collects, recycles and reuses shoes from warehouses of footwear companies and closets from individuals. It distributes usable shoes to people in need around the world (recycling comprises less than 2% of donated footwear). Since 2005, Soles4Souls has given away over 13 million pairs of new and gently worn shoes (currently distributing one pair every seven seconds). The shoes have been distributed in 125 countries, including Haiti, Kenya, Nepal and the United States. For more information, www.Soles4Souls.org.

And of course the perfect pairing for these wines? A tasty sandwich courtesy of Dark Roasted Blend (original artist unknown): 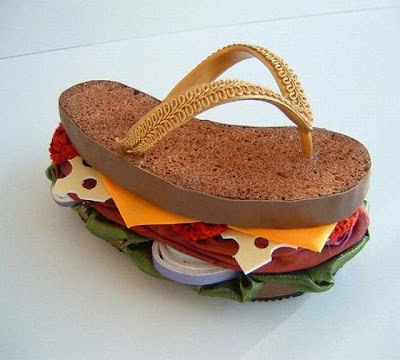 Note: These wines were received as samples.
Posted by Benito at 12:38 AM

Thanks for this review, I spotted it at my local liquor store and tried it based on your rec.
This wine went well with oven baked sockeye salmon and a goat cheese and spinach salad. Love the screw cap, wish more companies would do that for we Seniors.
Thanks!

in 1955, when my family moved from Rochester NY to Memphis (actually Frayser, still in the county then) my brother and I (I was 10, he was 14) were amazed that all the kids in the neighborhood went barefoot from May through September. (and that they played Silver War instead of cowboys and Indians; I had no idea what the hell they were talking about.)

I hadn't thought about that particular advantage for screwcaps, but I'm sure it does make life a lot easier.

When I was 7 the family went up to Flint, Michigan for a wedding in February. It might as well have been Norway. I had trouble understanding the accents, but on top of that I didn't know anything about hockey, ice fishing, or snowmobiles. When they talked about building fishing sheds on top of the ice I thought they were teasing me.

Hmm if more people say is good
I must try it ..and this post is the decisive thing in convincing me to try.

I like to read this post. It might as well be Norway. I can not understand the accent, but I do not know anything about hockey, ice fishing, snowmobile, or the top. When they spoke of the construction shed at the top of the ice fishing, I thought they were teasing me.