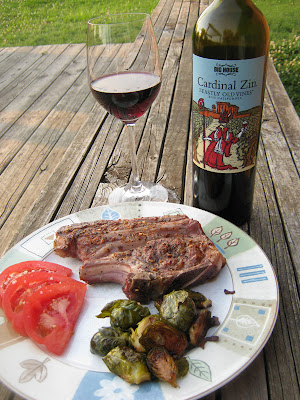 I've actually been waiting a long time to try this--oddly because it was included as a label design in a collection of Ralph Steadman's artwork. This would have been sometime in the late 90s, and Steadman had done a few whiskey and wine labels by that point. (Later he would do designs for the Colorado based Flying Dog Brewery.) I thought the pun was funny, but couldn't find the wine in my area.

The original design was back in the Bonny Doon days, and was even banned in Ohio. The new design fits in well with the other Big House brands, but I'll always miss the splattered ink of Steadman. I didn't think about Cardinal Zin for a long time, but lo, after trying several of the wines in a blogger capacity and contact with the winemaker, it just happened to show up on my doorstep one humid June afternoon.

2009 Big House Cardinal Zin
$10, 13% abv.
80% Zinfandel, 10% Mourvedre, 8% Carignane, 2% Petite Sirah
From "Beastly Old Vines"
Prune and dried cherry aromas with a bit of cassis. Let it breathe for a while and the tannins disappear, leaving behind a great dark fruit profile with a smooth finish. It's enclosed with a convenient screwcap and is also available in the 3 litre Octavin box.

Served with a couple of lamb chops that were dry-rubbed, allowed to rest for a few hours, and then thrown on the hot side of the grill for a few minutes before being allowed to slow cook on the cool side. A few local tomatoes and some Brussels sprouts sautéed with bacon rounded out the meal.


Note: These wines were received as samples.
Posted by Benito at 12:09 AM