I recently had the pleasure of attending a private wine tasting at the home of Bill & Juli Eck, a pair of wonderful people that I've just recently met here in my home town of Memphis. My initial encounter was through Juli commenting on my food posts and my admiration for her photography. For years the Ecks have been friends with a pair of Napa Valley winemakers, and finally managed to get them to come here for a visit. What followed was an unforgettable evening of food, wine, and fellowship. Lady A and I stayed until nearly eleven, but I have a feeling things could have run until the wee hours of the morning. 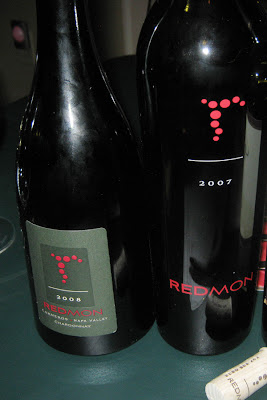 Redmon Wines is run by the husband-wife team of Lisa Redmon-Mangelson and Scott Mangelson. It's one of those uniquely American stories: her family ran A&W hamburger joints in Napa and bought some local property, his family ran dairy farms and orchards in Orem, Utah. Starting with a 1999 garage wine, they began making high-end Cabernet that earned a 97 from Wine Enthusiast with the 2006 vintage. Lisa joked that her family was the only one that moved to Napa to get into the root beer business, and Scott joked that there aren't many graduates of Brigham Young University that have gone into winemaking.

Their philosophy is small, high quality production, with only as much expansion as they can personally handle. While they do not currently have an organic certification, they do engage in sustainable viticulture and are incorporating organically-grown grapes into their upcoming releases. They employ a double sorting process, in which the grape clusters are hand-picked to remove anything that's not a grape or stem, and then the clusters are run through again for a second round of manual inspection. And those are only the grapes that have survived to the picking process--they allow the weaker grapes on their 40-year old vines to fall off naturally, and only produce wine from the strongest clusters. Because of the limited quantities of these wines, you're probably not going to see them on the shelves of your local shop. Instead, your best bet is to order through their online store.

Briefly, I must mention the appetizers that Juli sent out in waves during the tasting: deviled eggs topped with salmon roe, crab cakes with remoulade sauce, pinwheels stuffed with a bratwurst-mustard filling, dates stuffed with bleu cheese and wrapped in bacon, individual Beef Wellingtons in puff pastry, and I'm sure I'm forgetting something... It was all incredible.

This is not a heavily oaked wine, and certainly not the caricature that many California Chards have become. On the other hand, it's not a clean and crisp unoaked wine. Instead, they've established a harmonious balance that reminded me of Pouilly-Fuissé. There's a touch of buttered popcorn, and some toast and toffee, but none of these are overpowering. The acidity is balanced, and the wine has a bit of that elusive "old church" aroma that I think will develop with another couple of years.

Pure Cabernet Sauvignon here, with dark plum aromas. Smoky, spicy, with firm tannins. There's lots of black fruit, and it has a deep, rich structure with a long finish.

My favorite of the evening, full of figs and tea and with a remote hint of green bell pepper. There are great blackberry flavors present without being overly fruit-forward. This is one of those wines that you can sit with for a while and contemplate with each sip, and very Bordeaux-like in its execution.

A new project from the winery, this particular bottle was a barrel sample and was decanted for some time prior to serving. Too early for me to evaluate, but I did enjoy what the Cabernet Franc is bringing to the mix, and it's a classic Bordeaux blend.

During the Q&A session, I commented on the clean, minimalist design of the label, particularly the Cabernet Sauvignon with a red logo and red and white text printed directly on the glass. The dotted "r" design stands for Redmon but also describes their early head-trained vines, that cascaded over on one side to maximize exposure to sun depending on where the vine was planted. The design you see today has evolved from some earlier labels, and reflects their own concepts and ideas combined with the efforts of a talented graphic designer.
Posted by Benito at 12:42 AM

sounds like a fabulous evening of food, wine and company. allow me to express a wee frisson of jealousy ...

I'll see if I can work something out the next time they're in town--I think you'd be impressed by their wines. It was a good sized group, maybe about a dozen people, which allowed for plenty of one-on-one conversation with the winemakers.

"Pure Cabernet Sauvignon here, with dark plum aromas. Smoky, spicy, with firm tannins. There's lots of black fruit, and it has a deep, rich structure with a long finish."

THAT is what should've gone in my recent [insert description here]. Dead on!

Sounds great. Would love to get some regional dinners like this put together once in a while.

I figure we're all blind men touching different parts of the same elephant. Some feel the trunk some feel the legs, and some feel the ears. (Not me, I'm not that tall.) I figure enough folks write about a wine and we develop a good overall picture.

It's always nice to meet winemakers in an informal setting. I'm waiting for the first winery that decides to load up a motorhome and go on a nationwide tour of bloggers and small restaurants.