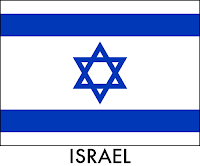 The Golan Heights is one of those parts of the world that is mainly known from news reports about war, treaties, and ceasefire negotiations. Formerly part of Syria, it's been part of Israel since 1967. I'm not going to get into politics here, but the whole of modern Israel has been occupied by dozens of civilizations over the years. There have been warring factions of Ancients and Romans and Jews and Christians and Muslims since...forever. The waves of Ottoman occupation over six centuries (up to WWI) tended to disrupt wine production, and in general, war is bad for wine--see France during a few troublesome decades in the 20th century. That's why the Israeli wine industry is both very old and very young. The modern vineyards of the Golan Heights were first planted in 1976. Lebanon is in a similar situation, with thousands of years of wine history, a few centuries of interruption, and then modern plantings conducted by French winemakers. (Baron Edmond de Rothschild was involved in Israeli vineyard planting back in the late 19th century.) 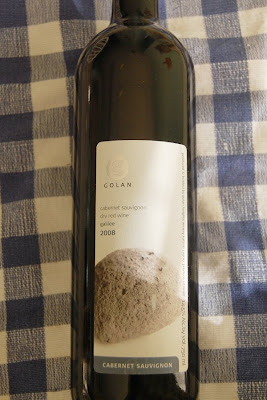 2008 Golan Heights Winery Cabernet Sauvignon
Cabernet Sauvignon
Galilee/Golan Heights, Israel
$15, 14.5% abv.
Light, mild, bright raspberry aroma and flavor. Light tannins, a little tart. Overall excellent balance. This comes from the northern part of Israel, and although the climate is hot and dry, they're able to produce mellow wines. As I've said before, folks need to think of wines from Israel and Lebanon as being part of a broader spectrum of Mediterranean wines, rather than as something exotic from the Middle East.

For years, Kosher wine has had a bad reputation as being cheap, sweet, and harsh. Just like with any other category or style of wine, whether it be sparkling or biodynamic or pink, the individual bottle can be good, bad, awesome, or undrinkable depending on how it was made. For households that keep Kosher, as well as for the high holidays, it's nice to keep in mind some producers who make wine that is 1) great first and 2) Kosher second. This one, for instance, is also Kosher for Passover, a higher standard required during that particular holiday. Others who do not hold to the religious dietary laws get the opportunity to enjoy a tasty wine from a region that they might not know very well. We all win here.

i served this with an odd and, alas, not Kosher dinner: mixed grill of beef and lamb, with sides of mushrooms and red onion marmelade... Plus some Brussels sprouts sautéed in bacon. It performed admirably with the wide range of flavors, and it's mild enough that it didn't require any breathing or decanting beforehand. לחיים


Note: This wine was received as a sample.
Posted by Benito at 1:56 AM

Holy Crap! You wrote up a wine we sell...now I can comment. Oh wait, I haven't tasted it. Dammit. Well least now I can use your notes when someone asks me about it.

The dinner sounds really good. I wonder if the Golan wine is similar to the Chateau Kefraya wine we had in Beirut earlier this year. We had a few bottles actually and we really enjoyed it.

Do you carry it in a special Kosher section, or in the "Assorted Other Countries" shelf? I once saw a place that kept its Israeli wines packed in with New Zealand for some bizarre reason.

I love Lebanese wine, but it's hard to find around here. When I worked in Cleveland I used to visit Lebanese restaurants frequently, and several of them had amazing Lebanese wine lists. Chateau Musar is probably the best known, and has an impressive lineup.

Ben,
We actually have an Israeli department. Not big but we didn't want to relegate some nice wines to just being Kosher.

You know if I ever visit your shop, I'm going to keep drifting away from the French section. "Ooh! Croatia!" ;)

Benito -- sorry to catch this late. Good to see that you like these wines. I haven't had an opportunity to try any wines from Israel, but I get questions on them all the time (goes with the territory -- I'm an MOT). The availability of anything but Manishewitz and Baron Herzog in Georgia is slim. I may need to pick up a few bottles of this stuff when I'm back in the homeland (NY). Have you tried any other Israeli/Kosher wines that you think are worth a go? Please let me know -- I really want to review something but I'd love it to be something great!

There's some Georgia distributor contact information on the Yarden website. They're the importer for this and related quality Kosher wines from Israel. Here in a bit I'll e-mail you some more details about some other wines I've tried.