When I first got interested in bitters, I purchased a sampler set of Fee Brothers bitters from Amazon and wrote about them. I was contacted by some of the family that still operates the 150-year old company, and based on my interest and experimentation with cocktails, I've had the pleasure of receiving samples of their new products over the past two years. I don't receive any financial compensation for this, and there's no quid pro quo involved, but I like the fact that a company is resurrecting very old cocktail ingredients while also pioneering new ones. 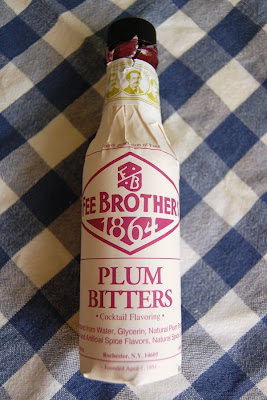 Fee Brothers Plum Bitters are out just in time for Christmas, with a flavor profile based around an English plum pudding. When VP/Production Manager Ellen Fee makes a new bitters recipe, it's not just a matter of throwing some fruit in alcohol for a while. Fruits have different flavors in the skin, pith, flesh, and seeds. These elements have to be balanced, but beyond that the natural fruit aromas and flavors are combined with proprietary blends of herbs and/or spices much in the same way a perfume or secret BBQ sauce is blended. Here, the aroma is like a plum liqueur combined with a little cinnamon, cloves, and other holiday scents.

While I don't know if plum or prune bitters are an old tradition (references are scant), the execution is definitely old school. I found that it made for a rather festive Manhattan that is perfect for the winter months. I'd also suggest a dash or two in a cup of hot tea, and based on the tradition of Korean/Japanese plum liqueurs, there might be an option for some interesting Asian fusion cocktails. (As I'm not a fan of sake and don't have access to soju, I leave this as a suggestion for other mixologists.) 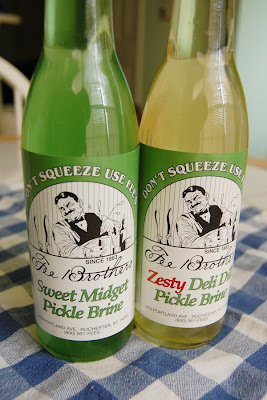 Years ago the Dirty Martini came into fashion, and folks everywhere were splashing some olive brine into their gin or vodka. More recently, individual bottles of olive brine have shown up so that you don't have to worry about drying out your olives.

But fads move along quickly in the cocktail world, and one of the new trends is based around pickle brine. This is something with a long but odd history. Drinkers of pickle brine were either weird old guys or star athletes. (Indeed, before Gatorade, pickle brine was common for some football teams and is still recommended for avoiding muscle cramps.) The traditional method of bar consumption is the Pickleback: down a shot of whiskey followed by a shot of pickle brine. I really dislike doing shots--I prefer to savor what I'm consuming, but I gave this a try. Between the two varieties shown here, I much more preferred the Zesty Deli Dill Pickle Brine over the Sweet Midget Pickle Brine. (This goes along with my preference in actual pickles--I like them sour, salty, spicy, and sometimes hot, not sweet and mild.)

Performing the Pickleback with the Zesty Deli was interesting but surprisingly tasty. Some sweetish Canadian whisky followed by the hot spicy brine. It will definitely open your eyes, and between the two liquids, your palate gets to experience practically everything possible in a few seconds. The Sweet Midget did not work as well; again, much of this is based on my personal tastes. I also tried a splash of the Zesty Deli in a martini where it provided a unique zim zam zoom! Cold gin really brings out some of the cucumber flavor, and the only odd thing is that the flavor combination makes me crave hard boiled eggs. That would make for an ugly garnish, but a little dish of deviled eggs, celery sticks, and some cheese cubes would be great here. 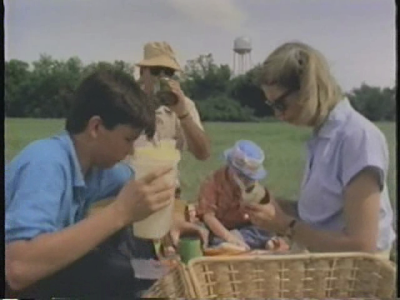 This blurry screenshot will take a little explaining. Jean Shepherd was the writer and radio personality responsible for the classic 1983 film A Christmas Story. (In 2008 I visited the house where the movie was filmed.) There were two other semi-fictionalized movies based on stories of his childhood, and all three feature entirely different casts. Few have seen It Runs in the Family (My Summer Story), and I think even fewer have seen the source of my screenshot, Ollie Hopnoodle's Haven of Bliss. In OHHOB, the main character Ralph is played by Jerry O'Connell (Stand By Me, Jerry Maguire). His father--The Old Man--is played by James B. Sikking (Hill Street Blues, Doogie Howser, M.D.).

It is mentioned that The Old Man liked to drink pickle juice from the jar, both because he liked the flavor and felt that it warded off colds. In this scene, the family is having a picnic while the car's radiator cools down, and in his agitated state he demands the pickle jar for a quick pick-me-up. Based on that scene, I remember taking a swig from the pickle jar every now and then when I had a craving for something sour and salty. Yes folks, TV can make kids drink pickle juice. Call your congressman today.


Note: These products were received as samples.
Posted by Benito at 12:09 AM

Thanks for the informative post, Benito. Plum bitters from Fees is also a favourite of mine. You're right on that they taste like English plum pudding.