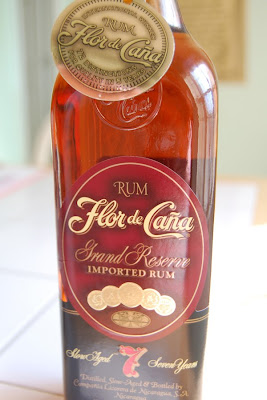 Flor de Caña is a Nicaraguan rum whose name means "flower of the sugarcane", and I first sipped the 5 year old version a few years ago at a dinner party. I was impressed by the smooth complexity of it, and how it was an experience much closer to whiskey than what you would associate with rum. I've enjoyed some spectacular aged rums over the years, and just like wine it's interesting to see the differences between different regions. In this case, I'm talking about Puerto Rico, Jamaica, the Virgin Islands, Bahamas, Haiti, Dominican Republic, Barbados, Anguilla, an Island South Of Miami, etc. Mainland rums aren't as frequently noticed but I've always had a soft spot for this one.

I received a sample of the Flor de Caña Gran Reserva, aged 7 years. After harvesting and processing the sugarcane from Chichigalpa on the western point of this triangular country, the distilled spirits are packaged in various ways. Beyond the white rums, you get bottles with 5, 7, 12, 15, or 18 years of barrel time. Nothing wrong with a white/silver rum for mixing, but the good aged brown ones are meant to be savored and enjoyed on their own. As a side note, Flor de Caña carries an OK Kosher Certification, which according to some sources makes them the only rum producer to do so (there are others out there). Interesting factoid to keep around for gift giving. There seems to be very little advertising or publicity around this little curiosity, and while it's not Kosher for Passover, I'd much prefer this over Slivovitz or other traditional spirits if I kept treyf bottles out of the house. L'chaim, amigos!

My tasting notes on the bottled rum: Savory, meaty, almost buttery aroma and flavor, with a silky smooth beginning and a quick, biting finish. It's a velvety rum, and drier and lighter than the 5 year old versions I've had in the past. This rum is 80 proof (40% abv) and retails for around $25 for a 750mL bottle in the Memphis area.

The press release suggested a series of options for making your own spiced rum. I'm not usually a fan of spiced rum, because it tends to be sweet and vanilla-flavored. Taste a few spiced rums and the vanilla tends to dominate the other flavorings. I hadn't ever considered making my own spiced rum before, so I decided to go in a uniquely Benito direction. 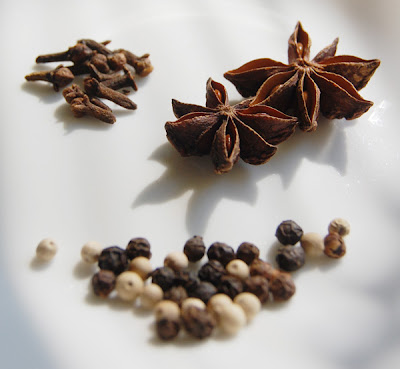 I used Telicherry black pepper, Sarawak white pepper, Chinese star anise, and cloves from Madagascar, mainly because these were some high quality spices that were on hand and I was inexplicably out of allspice. I really wanted to use some allspice in this mix.

I had no idea if this was going to work or not, but I decided it was worth sacrificing 250mL of the rum for an experiment. I sterilized an old jelly jar and added the spices, and topped it off with the rum. I kept the jar beside my computer for two weeks, and I would occasionally pick it up and turn it over a few times. I never shook it, but I gave it a turn from time to time, and would sniff it, or pour a dash into a glass for testing purposes. 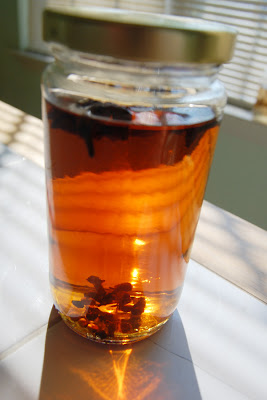 After two weeks, the spiced rum was pretty fragrant, and a good 50mL had disappeared from a series of sips and tastings. I strained the spices out, cleaned the jar, and returned the spiced rum to its container. The anise is the dominant aroma and flavor, but the pepper hits you in the back of the mouth on the finish. It's rich and spicy, and as much as I love my little creation, I only want a sip or two on its own.

What's the perfect length of time for spicing a rum? Hard to say, because the literature recommends everything between one day to one year. But all sources suggest tasting it along the way, and the good part is that you can always make a highly spiced concentrate and then thin it out with more rum later on, or even adjust the spices along the way. This is actually much more fun than I thought it would be, and the result more enjoyable than I expected. If you have cardamom and ginger and saffron and other interesting spices on hand, give this a try. But what am I going to do with my delicious little jar?

I'm planning on using this in the greatest egg nog ever made. Stay tuned!


Note: This bottle was received as a sample.
Posted by Benito at 1:15 AM

I don't have a high opinion of rum, but maybe that's because I instantly think of the taste in my mouth after downing a fifth of Cap'n Morgan Spiced (Vanilla, as you say) Rum the night before in college.

I suspect, like tequila and other "non sipping" liquors, high quality rum bucks the perception.

I know a few people that swore off rum after a bad experience with Malibu Coconut Rum. Of course, that stuff is about as sweet as pancake syrup.

If you can find a bar that carries some top shelf aged rum, order a shot and have them pour it in a snifter for you. Look for something around 10 years old and it will blow your mind. Note that as with Scotch, there are some aged rums that are really funky, and it takes a while to warm up to that style.