Benito vs. the Cocktail: The Rosewater Rickey

If you order a Rosewater Rickey in a random bar, you're a jackass. If the bartender even knows what it is, you're more likely to get a smack upside the head rather than your intended beverage. I'm not saying that it's a bad cocktail, but it requires some odd ingredients and techniques, as well as some danger. (Kids, be careful with this and other cocktails that involve fire.) 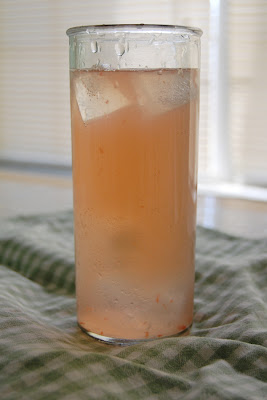 That being said, if you're curious and want to try one, there's nothing wrong with making one yourself. And if a bar actually has this as a special, go ahead and order one. Tip heavily, because the poor bastard on the other side deserves it.

Jamie Boudreau's Rosewater Rickey falls into the category of "molecular mixology", an offshoot of molecular gastronomy. You know, the food fad that involves foams of salmon essence and powdered asparagus. This cocktail has shown up a few times in popular culture, with appearances as punch lines in the short-lived Players and very recently in The Big Bang Theory, though Penny rightly refused to make the drink for Sheldon. Most bars don't have brandied cherries and Angostura Bitters in an atomizer.

In the interest of safety, I warmed my brandied cherries in a Pyrex ramekin and set them on fire while dashing on some Angostura Bitters. To capture all of the caramelized aromatics, I tossed the contents into the shaker and used the gin to rinse out the ramekin.

For the rosewater I finally got a chance to use a sample I received months ago from the good folks at Fee Brothers in Rochester, New York. Their rosewater is fragrant without being overpowering. In addition to cocktails, rosewater can be used in various desserts and Middle Eastern recipes. The aroma reminds me of my late maternal grandmother, who competed in rose shows and who always had a dozen varieties growing in the backyard.

As for the finished product, it is tasty, but not necessarily worth all the effort. Skip the fire, make a Lime Rickey, and add cherries and rosewater if you want that additional flavor. 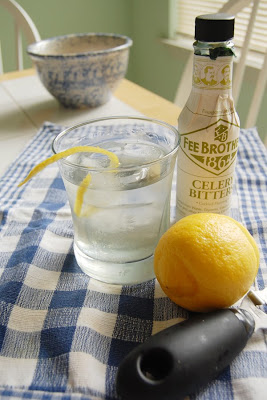 At the same time I also received a sample of Fee Brothers Celery Bitters. This is a rare and unique ingredient that was much more commonplace during the period between the Civil War and Prohibition. Indeed, many of the recipes from that era are more like soup than what we think of as cocktails. Celery bitters were often combined with chicken stock or boiled turtle meat, for instance. I did try it in a martini--gin, a little light on the vermouth here, maybe a 6:1 ratio. Like this it's... interesting. I can't say it's my favorite for a martini, especially when I have the great Fee Bros. Lemon/Grapefruit/Orange Bitters that I can use instead. Any of the citrus ones really perk up a martini in a beautiful way. (When it's hot outside, I prefer my martinis on the rocks, in a tumbler. This photo is from July, when it was regularly over 38°C/100°F.)

I have used the Celery Bitters in cooking, though. A dash in the beans, a few splashes in the rice to boost the broth, etc. It does have the most wonderful chicken bouillon aroma, and outside of some really obscure cocktails, I think this product is better suited to its original purpose as a kitchen ingredient. Indeed, bitters were never meant to be confined to the liquor cabinet. They served as seasonings, medicines, and all purpose flavorings for a variety of applications. I even have it on good authority that bitters are a great cure for hiccups.


Note: These bottles were received as samples.
Posted by Benito at 12:14 AM