When it comes to California and Cupcakes, my first thought isn't wine, but rather Google VP Marissa Mayer, also known as the Cupcake Princess. That has absolutely nothing to do with the wines below, but I thought I'd share.

Apricot and pineapple, touch of sweetness with a big fruit profile. After some breathing the fruit settles down somewhat, and you're left with a soft, round wine. Not a lot of oak. It's the kind of wine I'd serve with a salad and a croissant/chicken salad sandwich on a warm afternoon. 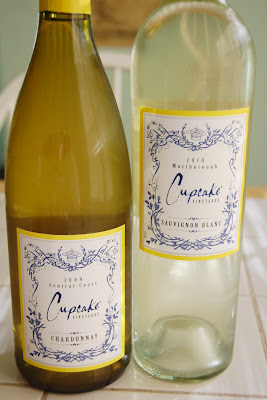 Grapefruit pith, tart acidity, touch of lime curd, bright and clean. Serve with any shellfish and you're in business.

Funny thing with this one: I always taste wines as blind as possible. This means that I don't read the labels, don't read the paperwork, or look up anything about the wines beforehand. I'll take a look at all that later. When it comes time to taste, I'll just pull red or white as needed, and jot down notes while I'm tasting. I don't want to be influenced by price or composition or anything else. Obviously I'll have some idea based on region and grape, but it's the best I can do to ensure a level playing field in the absence of a fleet of attractive young interns who will catalog, open, and decant said wines so that I may try them truly blind. (Ladies interested in an unpaid wineblogging internship, let me know.)

While trying the Sauvignon Blanc, I kept thinking, "This really doesn't taste like California." I'm not an expert on these things, but I've tried a few wines... a few thousand at this point, I've lost count. And then I actually looked at the label and discovered, "They snuck in a Kiwi wine here!" I had just assumed that Cupcake = California, and hadn't thought that they might be producing international wines under that marque. A cautionary tale? A lesson? Not really, just that sometimes your nose and tongue will surprise you when the brain isn't paying attention.


Note: These wines were received as samples.
Posted by Benito at 12:47 AM