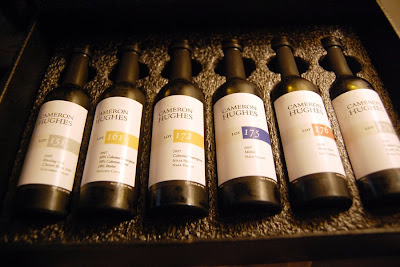 This is the second time that I've received a sample set of 50mL bottles packaged by TastingRoom.com. While this particular set isn't available for sale, it was a very convenient way to zip through six wines during a recent online tasting. I still prefer to sit with a single, full-sized bottle and try it with some food, but for some of these events that involve half a dozen or more wines in the space of an hour, this packaging method is a lot more convenient and reduces the amount of wine that gets poured down the drain.

Cameron Hughes is a négociant who buys excess grapes or finished wine from wineries around the world, and then blends and packages them in various ways. It's a great way to make wine without owning actual real estate, and is also helpful for the farmers, who have a market for their extra capacity. Because the lineup is going to be a bit different every year, and has expanded into international wines, the bottles are released with lot numbers instead of nicknames. In general I dislike this because if you look at a bottle of Bin 458 or Lot 103, those numbers don't tell you anything useful. And you could have separate wines from two different producers that were both Lot 150, but one would be a Chardonnay and the other would be a Merlot. As the selection grows over time, the numbers can run together for consumers--Cameron Hughes is up to around Lot 240. This is an area where some detailed information on the back label is crucial to help differentiate the wide range of products.

As well as their online store, these wines are sold in Costco and Sam's Club throughout the country, as well as other grocery stores in those states where such sales are permitted.

2009 Lot 151
Columbia Valley
70% Riesling, 30% Chenin Blanc
$10
Crisp and fruity aroma, medium sweetness with a pineapple character. This is the only Washington wine out of the group, everything that follows is from California.


Note: These wines were received as samples.
Posted by Benito at 12:01 AM

Lot 172 sounds like a worthy one to seek out.

I agree that the numbered wines don't really do much for the imagination, but CH has produced some great value wines. I like the 50ml idea too.