Friends and co-workers will occasionally bemoan their lack of cooking skills and assume that there's some sort of magic involved when I'm working in the kitchen. Now, I'm not the best cook in the world, and I have zero professional training. But folks usually leave my table happy, and I'm generally satisfied with my own cooking, which I've laid bare here on this website.

But all of that is built on lots of experimentation with the requisite failures along the way. I have screwed up horribly over the years, and will continue to do so. Recently I was attempting to make homemade mayonnaise--something I've done dozens of times--and wondered why in the hell it wasn't coming together. It's just oil, vinegar, and... oh yeah, I forgot egg yolks.

Presented for your reading enjoyment, an example of good intentions gone bad.

This was in 2004, the pre-blog era when I was having fun with a new digital camera. I did a few recipes on a personal webspace for friends and family, with steps photographed along the way. I was early into this modern experimentation phase and enjoyed trying out various food combinations. Some good, some not so good. Some soul-crushingly horrible. 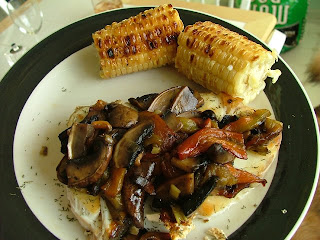 I had this great idea for a grilled seafood dinner: halibut with roasted peppers, onions, mushrooms, and dill served with fire-roasted corn on the cob. If you saw this on a restaurant menu, you might order it, and I'm sure that someone out there can make this work. Somehow, I didn't.

Nothing was burned, nothing was overcooked, but the particular combination just Did Not Work. I tasted it and wasn't impressed. I soldiered on, not wanting to waste food and hoping that I would at least be able to figure out what the bad element was. About halfway through I stopped, and felt awful. I really wanted to go lie down, but wasn't too confident about leaving the table. I started to clean up a bit, but within a few minutes I was clutching porcelain and pouring my guts down the drain.

I have a pretty strong stomach, as the recent pepper story will attest. But damn, this dish was just wrong, wrong, wrong. Maybe too much smoke, maybe something was spoiled, who knows. The fact of the matter is that I had an idea and it failed in a rather spectacular fashion.

But when I had recovered enough and returned to solid foods, I was back in the kitchen trying something else without fear. And that's my best advice to those that are terrified of cooking. Don't be afraid to screw up, we've all done it. If you haven't cut yourself, burned yourself, destroyed an expensive ingredient or ruined a cooking utensil, you're not trying hard enough. Get back in front of the stove and make something tasty.

I challenge my readers to share colossal kitchen disasters in comments, and for fellow bloggers to share their own culinary failures. You may not have pictures, you may not have all the details, but somehow you may inspire some struggling home cook to set aside the TV dinners and give real cooking another shot.
Posted by Benito at 12:12 AM

I keep trying, but the only thing I've mastered so far is the Benito Thumb Cut.