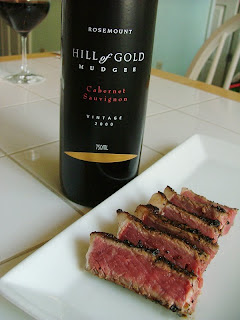 I'm always a sucker for solitary, seemingly forgotten bottles in wine shops. Such is the case with the 2000 Rosemount Hill of Gold Mudgee Cabernet Sauvignon, which didn't even show up on the computer when scanned. The clerk asked me, "Did this come from our store?" $17, 14% abv. New South Wales, Australia. Apparently 2000 was a rough year for this vineyard. While others shy away from the vintages that have asterisks in the charts ("hail damage, wombats got in and tore up the bloody vines"), I'm always excited to try the rare bottles that somehow make their way to my local merchants.

It's got a rich chocolate and leather aroma, with undertone flavors of raspberry, cigar, and black pepper. Definitely well aged, though I destroyed the cork trying to open it and had to pour it through a sieve.

I served it with a New York strip that had been coated with a rub made of raw coffee grounds, brown sugar, paprika, and assorted other seasonings. Seared and cooked to rare, sliced up thin and spread out on the plate. I paired it with some leftover watermelon and cole slaw--good summer BBQ fare here in the time between the seasons.
Posted by Benito at 12:32 AM